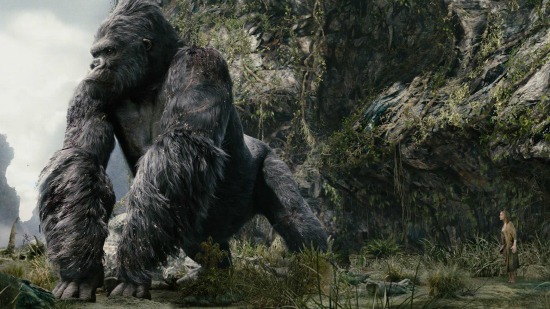 There hasn’t really been a decent King Kong movie since the original one 84 (!) years ago. But “Kong: Skull Island” finally sets things to right with a version that’s thrilling, a little bit scary and surprisingly funny.

It’s weird to think how well frights and laughs go together. Go back and rewatch the original Jurassic Park,” and you’ll find what is essentially a comedy with gruesome ingredients mixed in. The new Kong movie has a similar mix of awe, excitement and chortling.

In this version, set in 1973, Kong roams his lonely island in the South Pacific like a fallen god from Olympus. He is worshiped by the few humans living there, who appear to be wayward souls whose became trapped.

There’s also one castaway of more recent vintage, an American WWII pilot played with great mirth by John C. Reilly. When a new crew of soldiers and scientists arrives in their helicopters, his warnings about angering Kong go hilariously unheeded.

Among the new interlopers are Brie Larson, Tom Hiddleston, Samuel L. Jackson, Toby Kebbell, John Ortiz, John Goodman and Corey Hawkins. They all have their roles to fill, from half-crazed warrior (Jackson) who makes it a personal battle of wills with the great ape, to the peace-loving hippie photographer (Larson) and the survival expert (Hiddleston), who doesn’t actually do such a great job at keeping people alive.

Kong is truly massive in this iteration, the size of a skyscraper, and he’s got some well-justified grudges that drive his dour demeanor. Like the first film, we arrive at the end with a mix of fear and sympathy for him.

Sometimes the third time's the charm, or as with “Kong: Skull Island,” something like the 23rd.

Bonus features are quite robust, and in an increasingly rare instance for video releases, don’t require an upgrade to the Blu-ray edition. It and the DVD version have the same extras.

These include a director’s feature-length commentary track, deleted scenes, a fake backstory on the “Monarch” monster research group and several making-of documentary featurettes. The most interesting one is Larson’s photographs from the production set.