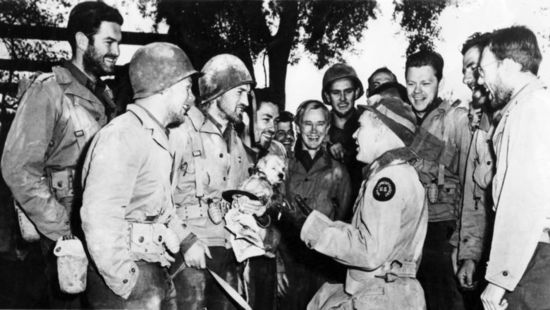 I admit I was confused about the premise of "The Story of G.I. Joe," which I had thought to be a biopic of renowned war correspondent Ernie Pyle. It's probably the signature role of Burgess Meredith's career -- aside from playing the Penguin on the Batman TV show -- and the film also marked the breakout of Robert Mitchum.

In fact, Pyle is barely a character in the movie, which focuses on a motley Army outfit fighting its way up the Italian peninsula. Pyle tags along from time to time, telling their tale as his favored group of "my guys," though their story continues even when Pyle isn't around. In the movie it's C Company, 18th Infantry, which wasn't actually deployed in Italy.

Pyle was involved in the production of the movie, which debuted around the time the theater in Europe was wrapping up. Pyle, who wrote in one of his last pieces that he hated the title but was too lazy to come up with a better one, was killed two months earlier. He personally approved Meredith for the role, with Walter Brennan and James Gleason also in the running.

Meredith was actually serving as a captain in the Army at the time, a fairly unknown character actor whose most prominent film role till then had been as George in the 1939 adaptation of "Of Mice and Men." The Army initially refused to let him go, and the matter was kicked all the way up to the White House. Meredith received an honorable discharge, ending his military service.

Directed by the great William Wellman, the film received wide acclaim and four Oscar nominations, including a supporting actor nod for Mitchum -- amazingly, the only recognition he ever got from the Academy Awards.

"Joe" is a terrific-looking film, with stark contrasting black-and-white photography from Russell Metty. He really makes the grime of the battlefield stand out. Many of the settings reminded me of Bill Mauldin's "Willie and Joe" comic strips.

Overall, though, I don't think the picture has aged all that well, and plays now as a fairly standard "buncha swell guys" ensemble war picture. Certainly it pales in comparison to Wellman's "Battleground" from 1949, which I call a masterpiece.

This is the sort of movie where we see a lot of faces moving in and out of the frame, and just a handful are meant to stick. They include Mitchum as Captain Walker, the noble everyman leader of the outfit who grows grimmer as time goes on and the losses mount, confessing that he often feels like a murderer.

Boxing champ-turned-actor Freddie Steele plays Warnicki, the no-nonsense, high-voiced sergeant who gets things done. He carries around with him a record his wife sent of his baby boy speaking his first words, which for some reason always plays backwards. Toward the end he finally gets it to work, and hearing junior say "Hi Daddy" sends him over the edge.

Wally Cassell is Dondaro, the Romeo of the outfit who seems to have a girl at every stop. Even when they're holed up for weeks in caves surrounding an ancient monastery at Cassino the Krauts are using as an observation post, he somehow sneaks out for his hookups.

Slightly less notable figures are John R. Reilly as "Wingless" Murphy, who washed out of the Air Force because he was too tall, and Pvt. Mew (William Murphy), who starts out as a faceless nobody and pretty much ends up the same way.

One of the film's watershed moments -- screenplay by Leopold Atlas, Guy Endore and Philip Stevenson -- is when Wingless marries his fiancé, who's also serving in Italy as an Army nurse. (She was played by Wellman's real-life wife, Dorothy.) The boys rig up a honeymoon sweet for them in the back of a bombed-out truck. He falls asleep on his wedding night, and we pretty much know what his fate is.

Mew is an orphan with no family, so his main role is keeping track of others through his $10,000 insurance policy courtesy of the Army. He makes a list of beneficiaries, which are crossed out and adjusted as people are killed.

Early on the company adopts a little pooch, which they name Arab -- pronounced so it rhymes with "HAY-rag" -- who's always being snuggled on somebody's lap or inside their coat. The captain initially forbids the men from bringing him along, arguing that the dog will get killed. Of course, he ends up outliving all the KIAs, including Walker himself.

The movie is more cyclical rather than having a traditional three-act plot, and seems aimed at relating what the life of a real dogface was like to the people back home rather than spinning a story. The soul of the movie is not the battle sequences, which are fairly brief and sporadic, but in the waterlogged caves where the rain never stops but time seems to.

The screenplay sprinkles in narration by Pyle taken from his actual writings, which I wanted more of.

Since Ernie Pyle preferred to tell others' stories rather than his own, maybe it's appropriate that "The Story of G.I. Joe" isn't really about him. From what I've learned he had a fairly conventional writer's life, combining long absences from home with bouts of alcoholism and marital discord.

He was the apotheosis of today's high-profile journalists, always making it about themselves. Maybe it's time we got back to celebrating the little guy -- but with a more coherent story.