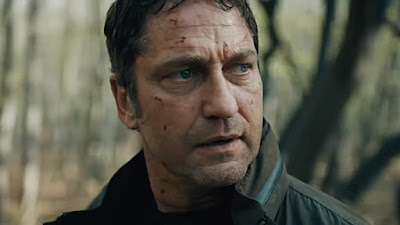 “He knows how we do this. He knows all our tricks.”

Any spy thriller character who hangs around long enough eventually makes it to the betrayal phase. The top guy -- it’s nearly always a guy -- is set up as the stoolie for some nefarious scheme to sabotage the agency from within, and is hunted by the government.

Bond, Borne, Smiley -- it’s always the same thing. They find themselves on the run, having to outwit their own team.

You could argue that “Fallen” isn’t technically in the spy genre, since protagonist Mike Banning (Gerard Butler) is a Secret Service agent, not CIA or something similar. But all the hallmarks are there: unstoppable combat skills, stubbornness bordering on mania, international plots and lots of cool technology able to do stuff straight out of, well, a movie.

I liked the first film, “Olympus Has Fallen,” well enough though the sequel, “London Has Fallen,” got tedious and not a little overly macho. All three have the same basic plot: the President’s life is threatened, and only Mike can save him. This time around it’s Allan Trumbull, played by Morgan Freeman with signature gravitas

In most movies like this, the action scenes propel you onward and the slower talkie sequences are what you must suffer through to get back to the pyrotechnics. This time around I was impressed by the “downtime” more than the parts with flying bullets.

Piper Perabo is an empathetic presence as Mike’s suffering wife, put through hell along with their baby girl when he is fingered as the culprit behind an elaborate assassination attempt on Trumball. Freeman spends most of the movie in a hospital bed, but when he was not I was reminded why it’s pleasing to have a man who is seemingly so wise and kind as POTUS.

I really was touched by Nick Nolte as Mike’s long-lost father, Clay, whom he eventually turns to when the chips are down. Clay ran out on the family a long time ago, and is stuck doing the crazy-loner-in-the-woods thing. But Nolte’s wet, pleading eyes, along with a couple of solid speeches about his motivations, genuinely hit the heart.

Quality acting in a dumb blow-em-up flick? Imagine my surprise.

The rest of the story is fairly forgettable, though it moves along at a nice clip under the direction of Ric Roman Waugh, one of the first stunt coordinators to move behind the camera. He co-wrote the screenplay with Matt Cook and Robert Mark Kamen.

Danny Huston plays Wade Jennings, an old Army buddy of Mike’s who now runs his own training facility with a hand-picked crew of mercenaries, and OMG if you don’t know where that’s going then you must not have seen Danny Huston in any movies over the past 20 years.

Seriously, Danny, get a new agent. Otherwise your first scene might as well come with a title card like the silent movies: "The villain has arrived."

Mike’s rumored to be in line for the director’s job at Secret Service, and could steer some business Wade’s way. Secretly he frets about not wanting to hang up his gun for a desk job, plus his body is breaking down after years in the field, leading to some ferocious pill-popping.

Jada Pinkett Smith plays the lead FBI agent hunting Mike; Lance Reddick is the outgoing Secret Service chief; and Tim Blake Nelson plays the nervous nelly vice president who has to take over the reins of office while the president is in a coma.

Butler is decent at the physical stuff, despite looking rather puffy and jowly these days, though the other actors have to carry him through the touchy-feely stuff.

He looks like his skin is sliding off his face and all gathering around his neck. I think the filmmakers were trying to make him look like crap, but also they went that way because that's the clay they had to work with.

Butler seems poised to take over the “Kickass Geezer” mantle that’s been passed down from Harrison Ford to Denzel Washington to Liam Neeson.

Filled with some decent action sequences and even a few well-plucked heartstrings, “Angel Has Fallen” surprises as the best of the trilogy.