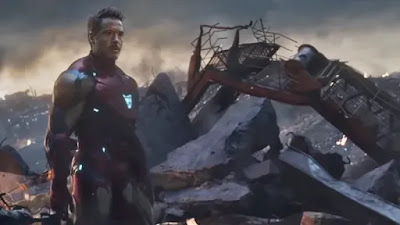 “Avengers: Endgame” is the culmination of more than a decade of painstaking cinematic world-building. However you feel about the merits of the individual films of the Marvel Comics Universe (MCU), you have to be impressed by the way they coordinated multiple cast members and sets of filmmakers toward this moment.

It’s a great big sprawling movie that incorporates virtually every superhero, from Robert Downey Jr.’s now-venerable Iron Man to Brie Larson’s Captain Marvel, who was just introduced in her own movie earlier this year.

If this feels like end times, that’s because it is.

If you’ll recall at the end of last year’s “Avengers: Infinity Wars,” galactic madman Thanos (Josh Brolin) had succeeded in his quest to gather the all-powerful Infinity Stones from the corners of the galaxy and use them to snuff out half of all life in existence. We watched as billions of people disintegrated into black ash.

This story picks up a few weeks after, as the remnants of the Avengers, Guardians of the Galaxy and other supers track down Thanos in a bid to reverse the apocalypse. They fail, and five years pass.
But then Ant-Man returns with an opportunity to travel through time, steal the Stones from earlier points in history, and make everything right again.

Needless to say, it doesn’t all go according to plan. Without giving anything solid away, suffice it to say that some of the heroes we thought dead return to life, some living ones meet their maker – and some of the deceased stay that way.

Despite being three hours long with literally dozens of characters to keep tabs on, “Avengers: Endgame” still manages to feel like a living, breathing story where we feel the consequences of having all this cosmic power unleashed – and humanity has to bear the brunt of that.

Even though this is definitively the finale for many of the heroes we’ve come to love, it’s also a new beginning as upstarts take their place: Falcon, Spider-Man, Captain Marvel and more.

While some people are undoubtedly sick of comic book movies by now, I think I speak for many when I saw: if it’s this good, keep it coming.

Bonus features are quite expansive, and include an audio commentary track by the writers and directors, six deleted scenes, a gag reel and video introduction by directors Joe and Anthony Russo.

There are also seven documentary featurettes: “Remembering Stan Lee,” “Setting the Tone: Casting Robert Downey Jr.,” “A Man Out of Time: Creating Captain America,” “Black Widow: Whatever It Takes,” “The Russo Brothers: Journey to Endgame,” “The Women of the MCU” and “Bro Thor.”