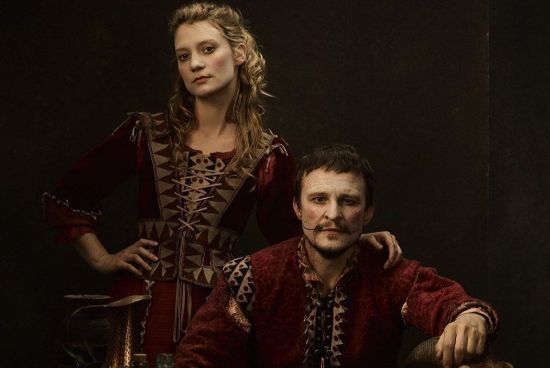 My wife asked me what movie I was about to review and I said it was a comedy about the origins of the "Punch & Judy" puppet show that makes a pun out of wife-beating. Within the first 20 minutes of "Judy & Punch," Punch drunkenly kills their baby and beats Judy to death, stashing her body in the forest.

So yes, we must add the "black" prefix to the comedy designation -- as in the blackest of black comedies.

Personally I'd call this Australian film from writer/director Mirrah Foulkes more of a cautionary satire than a comedy. Foulkes is a veteran actress taking her first turn behind the camera, and it's a bracing one that hopefully will lead to more.

Set in Victorian times, the story presupposes that the Punch show is the brainchild of one man, a self-glorified puppeteer played by Damon Herriman. (From what I can learn, the actual tale sprung from Italy and was widely imitated throughout Britain and France.) He's a formerly famous performer from "the Big Smoke," aka London, who has settled in the quaint hamlet of Seaside, named without any relation to proximity to a body of water.

Punch has a seemingly benign marriage to Judy (Mia Wasikowska), his partner in the puppet show and also acts as the emcee/barker beforehand, rattling pennies into an urn to support their meager existence. The marionettes are carved to look exactly like Judy and Punch, which is disturbing since they spend the whole act beating the hell out of each other.

Other than puppets, the main form of entertainment in Seaside appears to be hanging, drowning and pummeling witches. They have a regular "Stoning Day" that sends everyone into a high frenzy, the festivities led by the toadying Mr. Frankly (Tom Budge).

One senses that Stoning Day will always occur even if no apparent witches have presented themselves.

Punch is revered as the local celebrity -- even getting first throw on Stoning Day -- but longs for a return to a bigger stage. They have a baby girl and an elderly couple as servants (Brenda Palmer and Terry Norris), living in the dilapidated mansion where Judy grew up.

He also has a fondness for the drink, leading to the unpleasantness mentioned at the start of this review. Since Wasikowska is the star, I don't think I'm too deep into spoilerland by saying her death is short-lived. She recovers in a heretic's camp populated by uppity women, odd children and other outcasts who might otherwise find themselves in high demand on Stoning Day.

Among them is Dr. Goodtime (Gillian Jones), formerly the town medicine woman, who advises Judy to leave Seaside and its bad memories behind her.

Punch, being Punch, has continued his habit of spectacularly selfish ways, replacing Judy with one of his local admirers (Kiruna Stamell) and chalking up his family's disappearance to devil-worshipers. Benedict Hardie plays Derrick, the untested but good-hearted constable caught in the middle of all this.

The interesting thing about Punch is that, despite all his detestable acts, when he's finally cornered still insists that he's a good man. I think his delusion rests in the belief that because he is talented and (in this small corner of the world) important, then he must therefore have value. He is good because of who he is, not because of what he does.

This sort of thinking seems a virus of the mind very catching these days, methinks.

Wasikowska is stolid and true and a little dull, to be blunt. She's one of those actresses who gets cast because she projects in image of sweet innocence, though I don't think she's particularly adept at projecting her character's inner workings.

Still, this is a good tale sharply told. I really enjoyed the music by François Tétaz, a mix of orchestral and electronica themes that seems to positively groan with dark mirth. Similarly, the photography, costumes and sets are first-rate for a low-budget movie.

Men like Punch have always had the upper hand in life -- in his case, quite literally -- but sooner or later the controlling strings will be cut.

Posted by Christopher Lloyd at 1:23 PM