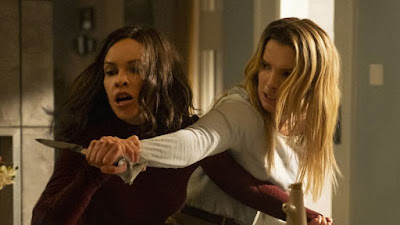 "The Hunt" is a memorable film, and not just because it was the last movie I saw in a theater in "the before time." No, it's a genuinely interesting picture, though not necessarily a very good one. But sometimes it's the flawed but intriguing movies that stay with you.

The premise is a pretty standard movie trope: the "deadliest game" in which humans hunt each other for sport. We've seen it in various forms, from cautionary dramas to horror flicks to futuristic fantasies like "The Hunger Games." "The Hunt" has elements of all of those, mixed with a political edge you don't often see in mainstream film.


You may have heard this movie was supposed to be released in 2019 but was delayed after mass shootings and the controversy over the fact it features righteous liberals hunting MAGA-types. It was attacked from both the right and the left.

Turns out the political stuff isn't really all that interesting -- it's just the launching point for the story. And the movie aims plenty of satirical barbs at both sides of the aisle.

What really makes it stand out is Betty Gilpin as the main character, Crystal. She and a dozen or so other red-staters wake up from a drugged fog to find themselves in a field. A box of weapons sits at the ready, and a few of them seem capable of putting up a fight. But they're soon torn to pieces by a bunker full of leftists who are using the sport to vent their various aggressions.

Crystal is unlike any other horror or action movie heroine we've ever seen. We soon learn that she's more than capable in a fight, and keeps her head on straight while everyone else is freaking out. She spends little time agonizing over why she's been targeted and gets straight to outsmarting her would-be assailants.

She also has a wry, deadpan sort of humor that's both grim and funny. Think of a self-effacing, feminine version of Dirty Harry with a sense of irony.

Hilary Swank is the main antagonist as Athena, a big-time CEO who organized the hunt. You know it's all building to a big girl-on-girl throwdown with Crystal at the end, and it doesn't disappoint with a surprisingly spirited and bloody clash.

A few other familiar names and faces show up -- Emma Roberts, Amy Madigan, Ethan Suplee, Sturgill Simpson, Ike  Barinholtz among them -- but one of the surprising things about "The Hunt" is its willingness to kill off seemingly important characters no matter who's playing them.

Director Craig Zobel and screenwriters Nick Cuse and Damon Lindelöf go for a mix of thrills, gore, satire and humor, and at times its a wobbly balance of tones. Something happens and we're not sure if we should react with delight, laughter or abhorrence.

Still, Gilpin's butt-kicking Crystal is worth the price of admission. I'd love to see this character reappear, maybe in a Sergio Leone-esque Woman with No Name type of series.