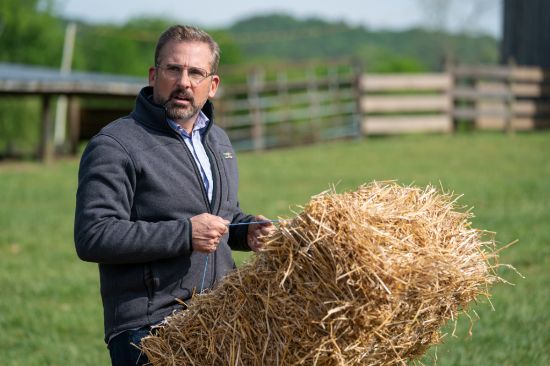 I always thought Jon Stewart was overrated as a TV fake news host, but he’s turning out to be a pretty decent filmmaker.

His fine directorial effort, “Rosewater,” had an international backdrop and didn’t get seen by too many people. Stewart’s second, “Irresistible,” is a sharp political satire that takes aim at the money, hype and competition-for-competition’s-sake mentality that drives our electoral system.

Political comedy/dramas are a fraught cinematic subspecies that’s been historically hit or miss, and as a result have fallen out of favor these days. “Long Shot,” “Vice” and “The Campaign” are the only ones I can immediately recall from the last few years, and they range from decent-ish to plain awful.

Stewart (who also wrote the screenplay) manages to avoid a big pitfall by casting Steve Carell as the lead, a scheming Democratic campaign veteran named Gary Zimmer. Gary represents pretty much everything wrong with American politics, and yet we can’t help liking him. It’s tough to march through an entire movie not being able to stand your main character.

As the story opens, the Hillary Clinton campaign has crashed to earth and the Democratic party is in a shambles, looking for any kind of win. Gary, who used to work for Bill, comes up with the idea of backing a conservative-leaning candidate in the heartland to show everybody the Dems can have a broad tent that includes guys with pickups and rifles.

When Jack Hastings (Chris Cooper) makes an impassioned speech at his town council about not excluding illegal immigrants and a video of it goes viral, Gary knows he’s found his man. Jack looks straight of central casting in the Gary Cooper mold -- a farmer, retired Marine colonel and widower, doesn’t talk a lot but is a fountain of homespun wisdom when he does.

(Though I’ve never met a farmer who uses that much hair product.)

Soon Gary has arrived in tiny Deerwaken, Wis., to convince Jack to run for mayor against the incumbent (Brent Sexton). Jack resists, but agrees on one condition: that Gary himself run the campaign. Soon Gary has brought his entire army of high-priced consultants, pollsters and other experts to run a Senate-level campaign in a town of 5,000 people.

The first half or so of the movie is fun and light and terrific. Stewart gleefully mocks pretty much everybody, from both political parties to the hapless media, who are depicted as being like that dog from “Up” -- clueless and easily distracted. Meanwhile, the townsfolk are authentic and humble and nice as pie.

I appreciated “Irresistible” for not always choosing the most obvious direction, like having Gary go all “Local Hero” and fall in love with the backward ways (to jet-setters like him) of Wisconsin. There’s also a bit of romantic interest with Jack’s plucky daughter, Diana (Mackenzie Davis), who likes to point out Gary’s condescending ways with a smile and some light flirting. She’s a lot younger than Gary, but Hollywood has its ways of glossing over such things.

Probably the film’s biggest failing is re-introducing the character of Faith Brewster, an utterly soulless GOP operative played by Rose Byrne. She beat Gary in the last election, and midway through the movie arrives with her own forces to put down Jack’s nascent campaign, because apparently flipping one mayoral seat in Wisconsin will start a national trend, or something.

Gary and Faith once had a thing with each other, so it immediately becomes a tit-for-tat exchange -- Faith brings in some big-name donors, so Gary does too, etc. Lots of insults and sexual innuendo fly around. It all has a very sitcom-y feel and belongs in another, lesser movie.

Holding it all together is Carell, who has that rare, mysterious ability to play off-putting (“The Office”) or even nasty (“Vice”) characters and come across as appealing. Gary is a jerk, but (unlike Faith) he’s a jerk who doesn’t realize he’s being a jerk, and if it’s pointed out to him can be redeemed, if only for a while.

Stewart gets a little preachy and self-righteous toward the end because, well, he’s Jon Stewart and that’s his bag. But missteps aside I found “Irresistible” to be a fun, smart and even occasionally delightful send-up of a problem everybody sees but pretends not to.