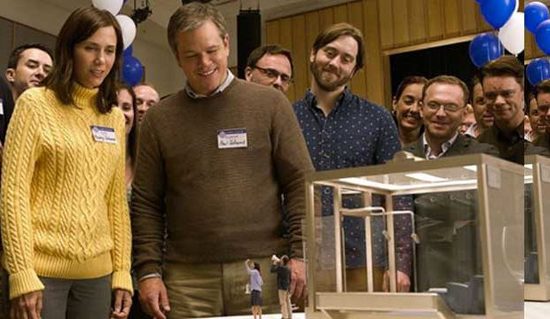 I’ve noticed that whenever Matt Damon has a comedic role where he’s playing a regular schlub, he always packs on about 25-30 pounds. At first I was impressed by the sheer devotion to physical transformation -- especially his uncanny ability to always get back to Jason Bourne fighting trim.

But over time, it’s come to feel like he’s making fun of the ordinary, unsculpted people who buy tickets to his movies. What are we to him, the pudgy faceless masses?

Hey Matt, not every middle-class person is living a life of quiet desperation with a dadbod.

I was very much looking forward to “Downsizing,” which the trailers present as a darkly satirical look at American consumerism and our footsie-playing approach to environmentalism.

In it, Norwegian scientists discover that by shrinking humans down to less than 1% of their current size, the crises of too little food and too much global warming can be addressed in a way to make human life sustainable in perpetuity. Of course, the real allure to “get small” is the scalable economy, so that a married couple struggling to get by, such as Paul and Audrey Safranek (Damon and Kristen Wiig), are instantly transformed into multimillionaires in a downsized community.

Unfortunately, this is not the film that director Alexander Payne and co-screenwriter Jim Taylor have given us. I was expecting something along the lines of Payne’s other work like “Sideways,” “About Schmidt” or “The Descendants.” They were cerebral movies that managed to explore the danker sides of the human soul while also finding plenty of occasions to make us laugh.

“Downsizing” is that, at least for the first 45 minutes or so. We watch as Paul and Audrey go through the process, meeting an old chum (Jason Sudeikis) at a high school reunion who was among the first go through “cellular minimization.” He talks it up to them -- and not just for the referral fee, he insists -- and they visit the facility where all the magic happens. They meet with a downsizing consultant, who informs them that their $152,000 in equity will make them worth over $12 million when they get small and go to Leisureland.

(The math sounds a little fishy to me, but hey, it’s Hollywood moviemaking, not an economics seminar.)

It sounds so simple: trade in your humdrum life of working hard for one in which you live in a mansion and enjoy an early retirement of luxury.

Things don’t go the way they expect, but I’m precluded from telling you more about the plot without giving too much information away. Suffice it to say there’s a point of no return, essentially marking the end of the first act, in which the movie’s tone shifts abruptly.

It’s like the movie takes a sudden left turn, it’s not funny anymore, and instead of satirical jabs we got a lot of lazy haymakers thrown at us that fail to connect.

The experiencing is like that scene in the first “Spider-Man” movie where Peter fights the school bully, and he can’t believe how slow the punches seem. That’s us: “What’s going on? Am I supposed to be laughing here?”

The special effects are pretty neat, though I kept waiting for a moment when a small person gets accidentally squished by their larger cousins. The film features plenty of celebrity cameos, including Margo Martindale, Laura Dern and Neil Patrick Harris.

Damon’s performance gets annoying rather quickly. Paul is passive and not particularly smart, continually letting others push him around. First it’s Audrey, then Dusan (Christoph Waltz), the gleefully corrupted neighbor he befriends, and later Ngoc Lan Tran, a Vietnamese maid who represents the flip side of Leisureland’s power dynamics.

She’s played by Hong Chau, in what first seems like a very stereotyped performance but later shows layers of emotions in a way that Damon’s does not.

I get what Payne and Taylor where going for: a parable about the fruitlessness of always chasing Eden. Paul and Audrey want a one-way ticket to an early heaven, but keep finding ways to make their lives more hellish. Rather than learn from it, they chase the next magic pill.

“Downsizing” is a great concept that soon spins off the track. It wants us to laugh at ourselves, but in the end it just makes us feel bad.