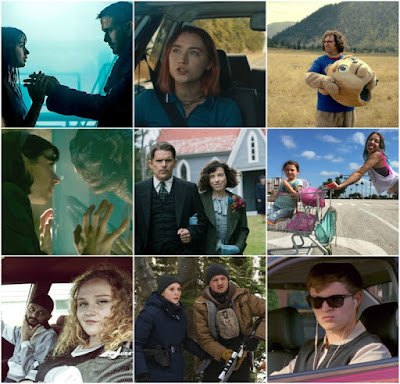 It is true that Top 10 lists are by their nature arbitrary, frivolous and wholly unnecessary. If you were to wipe my memory and force me to make this list again a month from now, there's no guarantee it wouldn't be considerably different from what you're reading today.

But it's equally true that these sorts of lists are fun to write and fun to read. They spur conversations and disagreements about what is right and wrong about today's cinema. In short, they get people talking about movies, which is quite possibly the only thing I like more than watching them.

I found 2017 to be a quite good year for film. I awarded four movies my highest rating -- 4 stars, 5 Yaps or an "A," depending on where it was being published -- at the time of their release, and have since upgraded one more to that level. I consider all them masterpieces, and saw at least a dozen more I would deem only a half-step down from that.

In making my top 10 list, I had a much easier time deciding on #1-5 than #6-10, particularly in deciding what would drop off the list. That's why I always make sure to also include a list of also-rans: films I adored that that didn't quite make the top 10. This year the counting of contenders runs to 18.

You'll notice that my list(s) are dominated by smaller indie movies this year. I offer no explanation or apology for this. In deciding my favorites, I deliberately try to avoid any overarching theme or bias. I likes what I likes. For whatever reason, in 2017 it was the low-budget, the offbeat, the overlooked.

So without further ado:


I feared this film more than any other. I thought there was no way to do a sequel to "Blade Runner," one of my favorite movies, that was narratively and emotionally logical. I was wrong. It's a brilliant, beautiful, disturbing look into a future that is very different from what we have today, yet easy to see the pathway from here to there.


After more than a decade cementing her place as the queen of indie films, then apprenticing as a screenwriter, Greta Gerwig forcefully announces herself as an important new filmmaker. A look at teenhood that is very specific yet universal. Smart, brave and riveting.


At first I took this to be a quirky hipster comedy about a manboy who finds himself living in a strange and frightening new world. Instead, I found the most emotionally satisfying journey of any film in 2017. It's a story of overcoming our fears and reaching out to others.


"Pan's Labyrinth" is probably still my favorite Guillermo del Toro movie, but this makes a strong case for second. Sally Hawkins is great, but the film also boasts a half-dozen supporting characters whose stories are just as distinct and compelling as the heroine's. Dark, offbeat, mysterious.


The year of Sally Hawkins. She'll get her Oscar nomination for "Shape of Water," but her work in this beautiful little indie about a meek Canadian artist was the performance of the year for me. And Ethan Hawke wasn't bad, either.


Willem Dafoe may well win his own Oscar for this movie, but for me it's one of the best examples of a terrific ensemble cast. An unflattering portrait of the underside of my hometown of Orlando, it resonates with strength and truth.


Danielle Mcdonald wowed me as a girl who's been degraded her entire life, and spits back her resentment in the form of vicious volleys of rap lyrics. An audacious debut by filmmaker Geremy Jasper.


This bleak drama looks at two Caucasian protagonists working a murder case inside an insular Native American reservation. It's a story of outsiders and aliens, belonging and frontier justice.


By turns funny, jazzy and dangerous, "Baby Driver" is tonally all over the map -- yet somehow it all works. Ansel Elgort enhances his acting credentials as a young getaway driver with a few twists.


Steven Spielberg's historical drama examines the bravery of Washington Post maven Katharine Graham and a few others in defying the White House to publish the Pentagon Papers, detailing the country's shameful history in Vietnam.

Any one of these films had a real shot at making my top 10 list. If you twisted my arm and made me pick a #11, it would have been "A Ghost Story," which I had on the list until the very end. "Stronger" or "Dunkirk" would be next. Listed alphabetically.

The Ballad of Lefty Brown -- Very offbeat Western in which Bill Pullman essentially plays the classic Walter Brennan "incompetent old coot" character, who takes over the story when the John Wayne type bites it.
Coco
Crown Heights -- The male performance of the year for me by Lakeith Stanfield as a wrongfully imprisoned man.
Dunkirk -- A different sort of war picture; not about individual heroes but the concept of heroism.
A Ghost Story -- Slow, deliberate, haunting. Not the sort of picture I usually go for.
Goodbye Christopher Robin
The Hero -- It looks like Sam Elliott's greatest role is being forgotten during the awards race. Pity.
Hostiles -- There is dour. Then there is grim. Then there is bleak. Then there is despair. Then there is "Hostiles."
It Comes at Night
Let It Fall: Los Angeles 1982-1992
Paris Can Wait
The Promise
Stronger
Three Billboards Outside Ebbing, Missouri -- Frances McDormand is amazing. So is Woody Harrelson, though it's Sam Rockwell who's being pushed for awards.
Tommy's Honour -- A drama about fathers and sons, Scotland and the history of golf. Another picture I didn't expect to adore.
A United Kingdom
War for the Planet of the Apes
Wonder Woman -- The superhero movie of the year.

These are films that were widely praised, often by people whose opinions I respect, yet I found them on some level disappointing. Many I still liked, just not crazy about them. If there was one unifying theme in movies that let me down this year, it's that they were too long. I saw so many 140-minute films that could've been 96.

Get Out -- Yes, it's a smart horror film that also boasts snappy humor and social commentary. A pillar for our times? Please.
Star Wars: The Last Jedi -- I've liked all the Star Wars movies, though this is easily the weakest. I mean, an entire plotline set off by illegally parking your starship?
The Meyerowitz Stories -- Clever portrayals of people you don't think for a minute could exist in the real world. Also, I'm still confused: was the inside joke supposed to be that they're all actually shitty artists?
Call Me By Your Name -- The last 40 minutes or so packs an emotional punch. The first hour-and-fifteen should've been edited down to about 20.
Good Time  -- Chase, chase, chase, why, why, why? All existential peril with no interior life.
The Big Sick -- Ray Romano and Holly Hunter were the best things about this.
Mudbound -- As depressing as "Hostiles," without anything compelling to make it worthwhile. During all the different characters' narration, I kept hearing Mr. Mackey from "South Park" droning, "Cuz racism is bad."
The Disaster Artist -- A funny movie with a spot-on impression by James Franco. And nothing more.
IT -- At least it didn't end in a preteen gangbang.
Lucky -- Harry Dean Stanton can act the hell out of anything. David Lynch cannot act, other than doing that one hard-of-hearing speech pattern he always does. As someone who's hard-of-hearing, I was offended.
Beats Per Minute
Marjorie Prime
Happy End -- "Hi, we're French and rich and awful, come spend two hours with us."
Thelma
Blade of the Immortal -- Martial arts movies are like baseball movies: they're better the less actual baseball/swordfighting it has. There's a great 84-minute flick in there somewhere.
Novitiate
Film Stars Don't Die in Liverpool
Posted by Christopher Lloyd at 12:30 AM