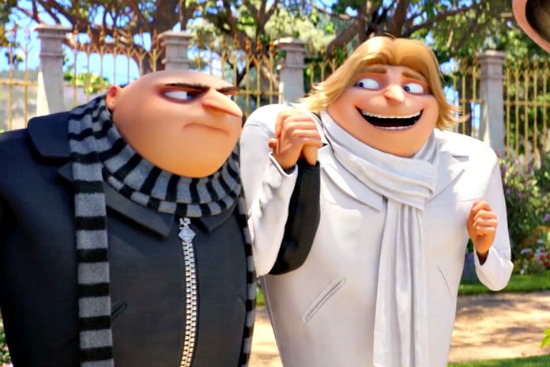 The “Despicable Me” franchise has gotten progressively more cutesy-futesy as time has gone one. The third iteration is still a decent family animated picture, though one built more for children than parents.

Some movies are great for the whole family. Others are ones you set up the kids with in the living room along with popcorn and spill-proof cups, while you go into the next room and stream “Game of Thrones” or what you have you. This is the latter.

Steve Carell is back again as the voice of Gru, spewing a thick, vaguely Slavic accent as a former criminal mastermind-turned-good guy. Gru went from basically being Dr. Evil from the “Austin Powers” movies to a happy, well-adjusted dude with a wife (voice of Kristen Wiig) and three adopted daughters.

Things go south for him quickly when he and Mrs. Gru -- not actually her name -- are booted from the international Anti-Villain League after they fail to capture Balthazar Bratt (Trey Parker), an ‘80s child star who has turned into the super-villain he used to play on TV.

Complicating matters further is the introduction of the twin brother Gru didn’t know about, Dru, who’s seemingly much happier, without Gru’s drippy bouts of melancholy but with a fabulous bouffant blond hairdo that contrasts grandly with his own chrome dome.

They get along well despite that, but then Gru recruits Dru to help him foil Bratt’s latest dastardly scheme, which involves a giant robot and bubblegum. Meanwhile, Dru is a little bored with the superspy gig and wants to get back to the family roots of dastardly deeds.

The uppity yellow minions, fresh off their own hit movie, are back with the usual gibberish songs and silly antics. As usual, they’re the best thing about the film.

Both “Despicable Me 3” and “Minions” grossed a billion dollars apiece at the box office, so expect to see a continuous helping of these movies for the foreseeable future. Hopefully, they’ll try harder to balance the zippy kid-friendly antics with a few more in-jokes to keep the adults tuned in.

Bonus features are pretty good, and include an all-new short film, “The Secret Life of Kyle.” There is also a making-of documentary, character profiles, one deleted scene, a “Minion Moments” feature, music video, mug shots and wanted posters, a sing-a-long with Pharrell and the Minions, a visitor’s guide to the Gru home country of Freedonia, and an Anti-Villain League database of secret spy stuff.