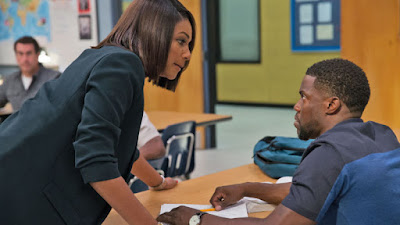 I wasn't even going to bother to write up a review of "Night School." It's a complete waste of time of the people who made it and the people who are unlucky enough to watch it. I already invested over three hours into it, including driving to and from the theater, and figured why compound it with more wasted ticks of the clock?

But bad movies are part of the gig, so I'm going to at least dash out a few thoughts.

This film, starring Kevin Hart and Tiffany Haddish, is not to be confused with the excellent documentary set in Indianapolis from a couple of years ago. That's currently streaming on Netflix, and I highly recommend you see it. It followed the journey of three Indianapolis adults attempting to obtain their GED high school equivalency degrees. It's a sobering and uplifting look at people trying to improve their lives despite massive roadblocks.

The new film is the cartoon version of that. Hart plays Teddy Walker, a 35-year-old high school dropout who is living above himself financially because he has a beautiful, successful fiance and feels the need to impress her. He drives a Porsche and lives in a swank apartment, but it barely getting by as the top salesman at a BBQ grill store. When the place blows up, he's out of work and without prospects.

In an absurd opening sequence, all the actors pushing 40 portray themselves as teenagers taking the SAT. Teddy finds himself unable to concentrate and blows off the test. The film doesn't seem to realize that you don't need to take the SAT in order to graduate from high school. Maybe he walked out of school, too, but the movie doesn't bother to show that.

Anyway, his best buddy says he'll hire him as a financial analyst at his firm if he gets his GED. So Teddy enrolls in the night program for adults at his old high school, where his nemesis is now the principal. Haddish plays the wise-cracking teacher who refuses to put up with Teddy's attitude and BSing.

The other students are the usual array of broad types. There's a snooty teen girl who got in trouble, a white doofus who can't work in the warehouse anymore because his back and knees are shot, a conspiracy-loving Muslim, etc. Mary Lynn Rajskub is the only one who makes any kind of impression as a harried mother who's very schizophrenic about how she feels about her role. She's the sort of woman who brings something to every church bake sale and then rolls her children into a lake.

You can pretty much guess the plot yourself. There will be capers, conflict, bonding, initial failure followed by inevitable success. The screenplay lists no less than six writers, including Hart, and I suspect there were many more adding to this mishmash gumbo. Director Malcolm D. Lee takes the approach of throwing everything up against a wall and seeing what sticks.

Not much does. "Night School" is a chronically unfunny movie. You know how in most comedies there are a few maudlin moments that you can't wait to be over? Here, I actually got more engaged by the sappy stuff than the attempts at comedy.

Hart has a built-in audience and Haddish is an emerging star, so I'm sure the movie will make bank. I like both of their screen presences, but this movie uses them poorly. "Night School" doesn't pass the old Gene Siskel test of whether you'd rather watch the cast having lunch and chatting than the movie they made.

Not only does it not get a passing grade, you actually feel dumber for having seen it.

Posted by Christopher Lloyd at 9:05 AM