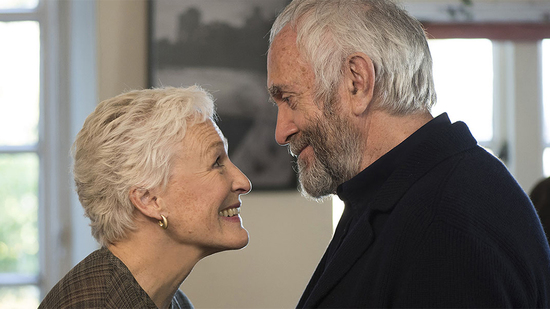 All married couples hold secrets -- sometimes between each other, sometimes together. Most are lies of omission: not telling a sister about what happened to the flood insurance money, or sparing your spouse’s feelings about the actual edibleness of their bunt cake.

The Castlemans have their own trove of secrets. But with them it seems their entire marriage is built on layer upon layer of secrets, like an onion that smells sweet but is foul inside.

Outwardly, they are bright, successful people reaping the benefits of a life of good work as they edge into their golden years, with accolades, prospering children and a first grandchild on the way. Joe (Jonathan Pryce) is forever announcing to anyone who cares to listen that his wife, Joan, is the love of his life -- his muse, his inspiration, his bedrock.

The interior of their relationship, though, is shot through with rot.

This is a career watershed for Glenn Close. As Joan, she plays a woman who has chosen to live a life of deception, which has with the passing of time become self-deceit. This is the story of her coming to the conclusion that she can no longer live a lie. It’s one of the finest performances of her storied career.

As the story opens, Joe has just been informed that he is to receive the Nobel Prize for literature. After an early disgrace at Yale -- he was sacked for sleeping with one of his students, which would be Joan -- he’s become a respected novelist with a bookshelf full of works that have been translated into innumerable languages.

The story follows them on their journey to Sweden to receive the award, which should be the apex of their marriage but in fact marks the point of its unraveling. Close and Pryce are so good together, with all the little quirks and understanding of each other’s idiosyncrasies that come from decades spent living together.

They play their roles for the public eye. Joe is the egotistical, philandering, fragile artist who must always be the center of attention. Joan is the long-suffering wife whose job is to support Joe in his and bear his many indiscretions. She was a promising writer herself in her youth, but tucked her ambitions away in the face of a male-dominated publishing world.

Close’s face is often set in a placid state of benevolence, with a little tightness at the corner of the mouth and eyes that lets us know it’s a mask -- one Joan is ready to let fall.

Their son, David (Max Irons), accompanies them on the trip and is witness to the growing storm. A budding writer himself, he resents that his father has never given him any sort of encouragement -- only critiques and dismissive praise.

Christian Slater plays Nathaniel Bone, a sniveling fellow shadowing the Castlemans because he wants to be anointed as Joe’s official biographer. He’s an endless parade of flattery and toadying, and yet it becomes clear the man is not a dolt.

Annie Starke and Harry Lloyd portray Joan and Joe as their younger selves. Joe was already married and had a daughter when they met as professor and student, but chucked it all away to dally with her. After he’s dismissed from teaching, the first draft of his debut novel, “The Walnut,” turns out poorly. Joan, who works as a secretary in a publishing house, offers to help get him noticed… and in other ways.

In a way, “The Wife” is a whodunit as well as a portrait of marriage. It soon becomes clear that their relationship is doomed, and the filmmakers -- director Björn Runge and screenwriter Jane Anderson, who adapted Meg Wolitzer’s novel -- tease us with drips of information about how it all went wrong.

I won’t give away the ending of this wonderful movie, other than to say it concludes with bitterness and regret but also a fair amount of joy and hope. Sometimes letting go of the past is the only way to open up new possibilities.