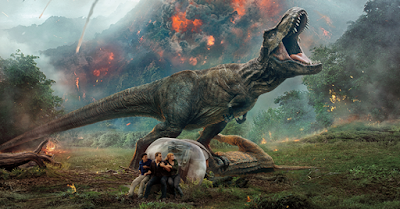 “Jurassic World: Fallen Kingdom” is the unavoidable sequel to 2015’s reboot of the genetically-recreated-dinosaurs monster mash, which made a gazillion dollars. So we’re back for another romp in the jungle, another super-duper special “boss” dinosaur and a whole lot of quips from star Chris Pratt and downer tut-tutting from other star Bryce Dallas Howard.

(Btw, isn’t it telling that in blockbuster movies featuring male and female leads, the guy is always the “fun” one?)

The setup here is that the dinos are still running rampant on the remote Isla Nublar, which originally was built as a massive amusement park. Believe it or not, an environmental movement has been launched saying they should be protected as an endangered species. Other more sensible folks simply worry about getting chomped.

Dino wrangler Owen Grady (Pratt) and operations manager Claire Dearing (Howard) are duped into helping some bad types retrieve the dinosaurs in hopes of preserving them. Instead, the plan is to auction them off as very toothy pets for the deplorable rich.

Of course, things go awry and the dinosaurs start munching on their would-be owners instead -- sort of a delish triumph for the 99%, if you think about it.

The twist is an Indoraptor, a genetically modified dinosaur that’s a mix between a velociraptor and the special boss dino from the last movie. Want to guess if the next “Jurassic World” flick will feature the spawn of this movie’s “special” dinosaur?

There are some exciting action scenes, but “Jurassic World: Fallen Kingdom” is a paint-by-numbers sequel without a lot of ambition or heart.

Bonus features are ample. The neatest feature is a series of video journals kept by Pratt during production, including one-on-ones with everyone from director J. A. Bayona to his own stunt double.

There’s also a conversation between cast and crew, a “JURASSIC Then and Now” looking at key moments in the film franchise and an “On the Set With Chris & Bryce” that explores their offscreen moments. Plus, 11 making-of documentary shorts.