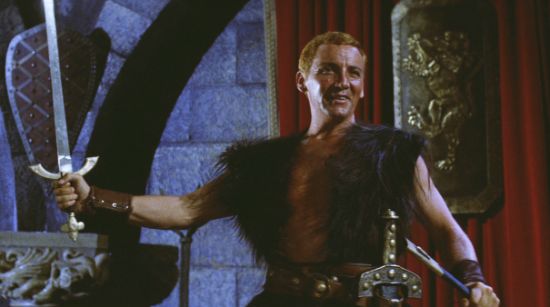 "Erik the Conqueror" is pretty well a total trash movie. How I love it so.

This 1961 Italian/French production is more or less a ripoff of 1958's "The Vikings" starring Kirk Douglas and Tony Curtis. Cameron Mitchell and Giorgio Ardisson play sons of the Viking king who are separated as children and become enemies as adult warriors.

It's shot in DayGlo-bright colors by director Mario Brava, who spent 40 years bouncing around between adventure and fright films. Some call him the Italian master of horror.

The most interesting thing about "Erik" is that the title character is a purely tertiary figure. Ardisson wears a resplendent blond pompadour and loses every fight he's in. The real center of attention is his older brother, Eron (Mitchell), the bloodthirsty inheritor to their father's colonialist ways.

Mitchell was 13 years older than his acting counterpart, with short-cropped copper hair that suddenly turns brown for awhile about two-thirds of the way through the movie. Eron's characterization similarly flips all around, from calculating war chief to egotistical revenge artist to conciliatory lover of all men.

Twin sister actresses Alice and Ellen Kessler play the ladies the brothers fall for, Rama and Daya. They feel like they belong in a 1960s television comedy, constantly pretending to be each other, getting into capers and giving the high hat to impudent boys.

The Vikings apparently have some very dire rules about female vestal virgins dallying before their marriage, and at one point the eldest chieftain sacrifices her own daughter for having a tryst. Both the girl and her lover are tied to racks and taken out to the wilderness for the vultures to feast upon them.

Eron watches this, knowing that he is secretly carrying on an affair with Daya. However, it appears they are careful not to fully consummate their love.

In a terrific sequence, Eron vies for the title of Viking war chief. His main opponent is Garian (Joe Robinson), a blond muscleman, and to settle the issue they are required to smith their own weapons on the spot and then fight to the death with them.

I love the idea of that -- it's like having a car race but the drivers must first build their own vehicles. Eron wins but spares Garian's life, naming him his chief lieutenant.

The backstory is that 20 years earlier, Eron and Erik's father, King Harald (Folco Lulli), captured a portion of Britain but was betrayed and their colony destroyed. The villain was Sir Rutford (Andrea Checchi), who was ordered by the English king to seek peace with the Vikings but instead massacred them. For good measure Rutford also assassinates his own liege when he arrives to administer justice.

During the fight, Harald orders his boys, then perhaps ages 3 and 8, spirited away to safety but they are separated and Erik washes up on the British shores. There he is found by the just-widowed Queen Alice (Françoise Christophe) and claimed as her own child -- no one apparently contradicting the possibility of the king siring a semi-grown son before his death.

Harald had both boy branded with the same serpent tattoo he has on his chest to prove their lineage, which seems like a fairly easily faked bit of evidence. I had a vision of a "Spartacus"-like scene where men rise to their feet, tearing open their shirts and declaring one after another, "I'm Erik!"

Just as Eron is named the Viking war chief, Erik is made Duke of Helford by the queen and leader of the British naval forces. Each side apparently only has one ship, which clashes in the North Sea in a spectacularly foggy and cheap-looking contest.

Erik's forces are defeated, with the help of an agent of Rutford who sets fire to the hold. He washes up on the shore and is revived by Rama, instantly falling in love.

Eron takes Alice prisoner, suddenly morphing into a wild boasting barbarian. He names Rutford his regent and instantly leaves England, warning the knight not to betray him like he has done to every single monarch he's ever served. It sort of begs the question of why you'd invade a country just to put somebody else in charge of it.

The fight scenes are staged pretty well, with plenty of speed and heft. The final duel between Erik and Eron, with the titular character again getting his ass handed to him, is sweaty and exciting. Of course, it ends with some shirts getting ripped open just in time for them to recognize one another as brothers, instantly transforming from mortal enemies into besties.

The reunion literally lasts about 30 seconds before Rutford has an arrow fired at Erik, which Eron takes in his stead. As he lies dying, he pleads to see Daya last one time. Rama, in an act of extraordinary compassion and/or cruelty, poses as her sister to see him off.

"Erik the Conqueror" was pretty well hacked apart for its various international edits, being released in late 1961 in Italy as a 98-minute film but not making it to the States until mid-1963 at 81 minutes.

Interestingly, most versions leave off the very last bit of the ending, in which Eron's funeral ship is set on fire by Daya wielding a torch. The final excised shot makes it clear that she stayed aboard, sacrificing her own life to be with her love.

I'm not even entirely sure why I liked "Erik the Conqueror" so much. It has terrible production values, a silly story and many of the actors aren't even speaking the same language, resulting in some hilarious dubbing mismatches depending on what language the soundtrack is in.

It has the feel of a Spaghetti Western before there was such a thing, bounding with fleshy vitality even as it brazenly borrows from mythology and other movies. It's Hammer meets Leone meets Harryhausen.