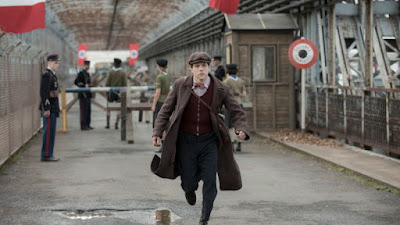 And now let us praise those forgotten heroes of World War II: the mimes.

Yes, "Resistance" is yet another tale of those who fought against the depredations of the Nazi regime and their Final Solution. No, I never really tire of Holocaust movies. As long as you've got a fresh angle to take and a committed group of storytellers, there's nothing wrong with reminding us all of the greatest evil in human history.

Aside from the utterly generic title, "Resistance" suffers from choosing to focus on the story of Marcel Marceau, the world's most famous mime and his wartime activities with the French resistance. Jesse Eisenberg plays Marceau, an aspiring young actor who works in his father's kosher butcher shop on a French town next to the German border.

From what I can gather the story has gotten a showbiz sexing up. It covers the period between 1938 and 1942, when Marceau was still a teenager. Eisenberg is almost 37 and while still famously baby-faced, can't pull that off. So he and his brother, Alain (Félix Moati), are aged up. Alain is also portrayed as the older and stodgier of the two, when in reality he was the baby brother.

The familial setup is typical: dad (Karl Markovics) disapproves of his son's artistic ambitions. Marcel argues that to him being creative is a necessary as going to the bathroom is to his dad. His mother teases at setting Marcel up with a nice local Jewish girl, Emma (Clémence Poésy).

Alain is active with the Boy Scouts, who at the time were taking in Jewish orphans displaced by Germany's movements to the east. Géza Röhrig plays Georges, the shrewd leader who recruits Marcel to  help care for the children they've ensconced in a nearby unused castle. Marcel uses his little bits of mime acting to calm the kids' nerves and lighten their spirits.

When Germany starts conquering countries to the east, Marcel's family and the orphan operation move west into the heart of France. But of course Hitler's armies take over in 1940, leading to a precarious situation for French Jews. Eventually Marcel, Alain, Emma and her sister, Mila (Vica Kerekes), volunteer to take a small group of the children to the Swiss border to find refuge.

Matthias Schweighöfer plays the heavy, Klaus Barbie, an ambitious young Gestapo lieutenant who seems to look upon Jew-hunting as his divine right. He's a chilly presence, and one tense scene aboard a train plays very well with nail-biting suspense.

Barbie was a real figure, though it seems unlikely the "Butcher of Lyon" ever personally encountered Marcel or his compatriots. Curiously, the movie actually takes the time to follow Barbie into his personal life and his relationship with his wife and newborn daughter, which seems shoehorned in unnecessarily.

Bella Ramsey, who memorably played young Lady Mormont in "Game of Thrones," turns up as the older orphan girl, Elsbeth, who acts as the audience's eyes and ears. There's even a suggestion of a bit of schoolgirl crush toward Marcel.

Toward the end of the war, Marcel served as a translator for General George Patton. The movie actually opens and closes with Ed Harris playing Old Blood and Guts himself, in a framing device that you just know is going to end with Marcel pulling out the white makeup routine for a command performance for the troops. Even after hearing his tremendous tale, they don't seem very impressed by the mime stuff.

I'd crack on Eisenberg for not appearing to be a very accomplished mime. But then even the best of them grow tiresome after just a minute or two. It's even suggested Marcel's acting skills allow him to hide in trees with virtual invisibility.

I guess I'm Woody Allen in the scene from "Annie Hall" where he observes a park mime pretending to lose his balance and decides to just push him over.

Writer/director Jonathan Jakubowicz has given us a well-meaning but rather flat Holocaust story. We know every story beat before it lands, observe the laughter-turning-to-tears-and-back-again moments without really feeling them. You can practically meet a character and know they're eventually going to die.

It almost feels like someone is sketching out a story in the air, rather than actually telling it to us.