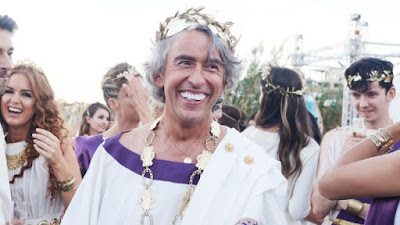 Tonally “Greed” is a sticky wicket. It seems very much to be a satirical send-up of the billionaire class from writer/director Michael Winterbottom starring his frequent muse, Steve Coogan, who have made the “Trip” series of movies and TV show together.

Wearing a gloriously saturated spray tan and glaringly white fake teeth, Coogan’s Sir Richard “Greedy” McCreadie is a buffoonish figure with a hint of steel underneath. A wheeler-dealer extraordinaire, McCreadie is the self-proclaimed master of High Street, the center of the British fashion world.

His MO is famous: he swoops in and buys up a clothing brand, strips it of all its key assets to line his own pockets, then washes his hands when the enterprise topples. He uses the nefarious but perfectly legal levers of finance to essentially use a company’s own value to buy itself, passing off one debt to cover another.

The story centers on preparations for McCreadie’s massive 60th birthday party in Monaco. It’s a Mediterranean mecca of wealth where the rich and famous park their yachts and their assets in its tax-free haven.

The shindig promises to be a bacchanalian feast of delights and pomposity. Everyone is to dress in ancient Greek clothing – Sir Richard is a big fan of the film “Gladiator” -- and they’re even building a Parthenon to witness staged fights with a real lion. Alas, the lion seems old and meek and the cut-rate Bulgarians brought in to do the job are mucking it up.

Isla Fisher plays Samantha, McCreadie’s ex-wife. She’s the very picture of unearned privilege. Despite their divorce they remain quite close, in no small part because his business enterprise uses her as the primary stakeholder for those aforementioned tax cheats.

And it’s clear the old fires still burn, despite the fact each has hooked up with a younger, hot companion.
A couple of other framing stores mix in: flashbacks to an interrogation before a British Parliament committee, during which McCreadie flashes his famous contempt for his perceived lessers (which is everybody). And a mild-mannered writer, Nick (David Mitchell), has been hired to write McCreadie’s “official biography, so he hangs around in the background acting as the audience’s eyes and ears.

Dinita Gohil plays Amanda, an Indian-Brit who acts as the tycoon’s majordomo, trying to handle a thousand details for the impending party. Shirley Henderson is McCreadie’s mother, who carefully isntalled the chip on his shoulder long ago. Asa Butterfield plays Finn, the son who openly despises his dad, musing about his affinity for Oedipus.

In one of the more amusing side bits, Sophie Cookson plays the pampered daughter, Lily, who is trying desperately to launch her own “famous for being famous” brand a la the Kardashians. (McCreadie is vexed to learn Kim is richer than he is.) She has a reality TV crew following her around to film staged turmoil with her boyfriend.

That’s the world of the McCreadies: faked and overpriced.

It’s a typically on-point performance for Coogan, but the story tends to go into respective cycles where he’s constantly raining verbal abuse upon his staff (without ever actually firing anyone, strangely) or twisting elbows making deals.

“Say four and shake my hand,” is his go-to move for lowball offers.

Toward the last third “Greed” grows much angrier and sadder, as we’re asked not just to resent McCreadie and giggle at his excesses but condemn him for the way he leaves a wake of ruined prospects behind him. Problem is, we’ve spent 70 minutes or so laughing at him so it’s hard to suddenly take him seriously as a villain.

The movie ends with what must be the longest string of title cards I’ve ever seen, with all sorts of facts and figures about how big-name fashion brands exploit workers in developing countries, paying them a few quid a day to make clothes that sell for a hundred times that.

Mixing rage and laughter is a very tough amalgamation, and not one “Greed” pulls off very well. Despite plenty of nice pieces, this movie is less than the sum of its parts.

Posted by Christopher Lloyd at 10:54 AM