Review: "The Other Lamb" 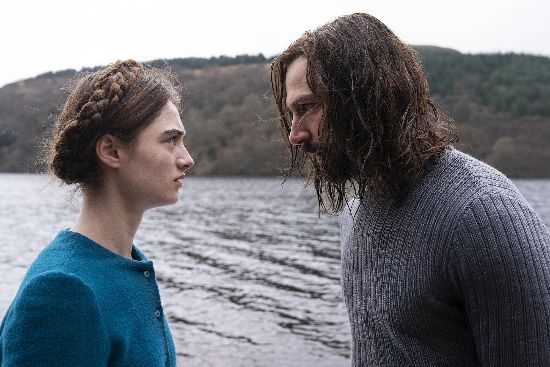 He counts the days. He knows our private rhythms.
--The Cursed Wife

Oh, they'd never say anything to the younger women. The girls, the sisters, the ones in blue. For they know their future, because it is their past. And it is one they feel they can't escape.

That's perhaps the scariest thing about "The Other Lamb." It's a drama with horror elements about a cult led by a charismatic man known only as The Shepherd. He looks a lot like Jesus. He thinks he is Jesus.

Or, at least, he wants his "dear faithful flock," as he addresses them, to think he is godlike.

But the older women, his wives who wear red -- yes, wives, plural -- are fully aware of what's going on. Some of them are the same age as Shepherd, who is not old but is not young, and remember back to a time when he had a regular name like any other man. They know he is a miscreant running a long con. He says they are his followers, when in reality they are his coerced harem.

They know what happened to the babies who were boys, for in this flock there is only one ram.

But this has been their life for so long, something they chose, and they cannot see how to untie themselves from his web of deceit.

Some of them have been part of the flock long enough to have daughters now old enough to vie for a place as wives. There is a growing discord between the generations. Indeed, a few barely into their teens have already left behind the coarse blue frocks of the younger set for the deep red denoting one of the Shepherd's wives. There are at least half a dozen wives, and about twice that many in blue.

There are whispered tales of former wives, mothers now departed from the flock.

Among these is Selah (Raffey Cassidy), who's on the cusp of ripening womanhood. Her mother was one of Shepherd's favorites, as he frequently reminds her, stroking her deep auburn hair that flows in the same way. Shepherd commands his little cult through a set of invented rules, and one of them seems to be he will not take a new wife until she is blooded.

Selah is seen as the purest of the girls in blue, though the seeds of rebellion are planted in her heart. She watches the way the Shepherd manipulates the women and sets them against each other. One of her friends becomes a wife before her, and sits across from Selah at the campfire fire stroking her swelling belly, pride and boastfulness enflamed in her stare.

Where and when does this story take place? There's a dreamy, castaway quality to it.

Occasionally cars pass by letting us know there is some level of modernity around. Shepherd warns of the "outside world" constantly threatening to intrude and destroy their heaven on earth. When police drop by with a warning, the flock sets off by foot on a journey to find a new home, carrying only a few possessions and trailed by the small herd of sheep that sustains them -- the flock following the flock.

Denise Gough plays Sarah, aka the Cursed Wife. The Shepherd calls her a "broken thing" and eschews her. She has hastily shorn hair and scars on her body, and without saying a word we know where they come from. When Selah begins menstruating and is placed in isolation with Sarah, they form a kinship, with the older woman mentoring the younger.

This is a strange, moody and hauntingly beautiful film. Director Malgorzata Szumowska and screenwriter C.S. McMullen are less concerned with pushing a plot than moments of contemplation and quiet power. Some will find it rather slow-moving, as I occasionally did.

The visuals are magnificent. In their initial home in the forest, the flock has used strings of yarn to create outdoor spaces -- a cathedral-like roof, for instance. For group meetings and prayers, they have constructed a "room" making four walls out of the perfectly parallel strings. It's an oddly gorgeous and disquieting effect.

Cassidy does a lot with a mostly reactive role, her gaze transforming from innocence to recognition to resentment. We feel the power that Shepherd has over her and the others, and also her slowly germinating resolve to oppose him.

"The Other Lamb" is a story of faith, family and blood. Not all shepherds are goodly guides, and some sheep will not be corralled.