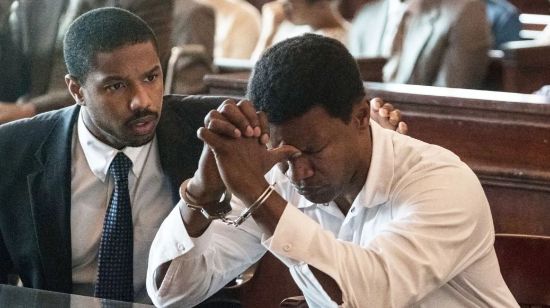 In last week’s column I spotlighted a movie, “Little Women,” which many thought magnificent but I blieve is merely good. This week I’d like to flip it and showcase a film hardly anybody saw, but I think was one of last year’s best.

Michael B. Jordan and Jamie Foxx star in “Just Mercy,” a based-on-true story of an innocent man and the intrepid long lawyer who fought to have him freed. It’s a familiar tale but one told with heart, conviction and some absolutely wonderful performances.

Jordan is Bryan Steven, a recent Harvard Law School graduate who eschews the big firms to open up a legal defense fund for death row inmates in Alabama in the late 1980s, which at the time was notorious for hardly ever overturning convictions. Foxx is Johnnie D. McMillian, convicted of killing a drug store clerk even though multiple witnesses put him nowhere near the crime scene.

We know the patterns of this kind of movie: Johnnie distrusts Bryan at first, but then grows to believe this young man will fight for him, followed by various setbacks in the courts, a fraying of bonds, followed by redemption. I’m not giving anything away.

Rob Morgan plays Herbert Richardson, another convicted murderer whose case follows on a parallel pattern with Johnnie’s, who also comes to be represented by Bryan. There’s actually a section of the movie where Herbert’s story begins to overshadow the main plot.

Tim Blake Nelson is loathsome and yet oddly sympathetic as Ralph Myers, who testified against Johnnie in order to get out from under his own crimes. He’s full of ticks and shame, and seems like a reptile who keeps molting layers of skin to reveal new shadings underneath.

All four men give Oscar-worthy performances. Alas, “Just Mercy” was ignored by the awards juries and barely made a ripple at the box office. If I’m any judge, this one’s a near-masterpiece.

Bonus features are decent, though not expansive. There’s a making-of documentary, deleted scenes, a featurette on the Equal Justice Initiative in Alabama and another titled “This Moment Deserves.”