Review: "Selah and the Spades" 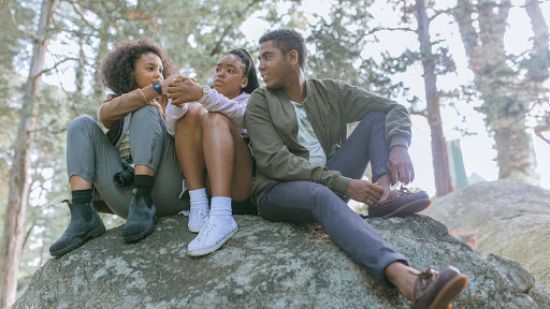 "Selah and the Spades" reminds me a little bit of "Heathers" by way of Spike Lee's "School Daze" with not a little Shakespearean rivalry thrown in. It takes the seemingly pedestrian conflicts of high school and amps them up to a level of life-shattering consequences and existential crisis. Here, prom is not just an overhyped dance by a seismic event that could lead to an outright war.

Writer/director Tayarisha Poe, making her feature film debut, introduces us to Haldwell Boarding School, a posh prep school for privileged children to prepare for college and the life beyond it by practicing the sort of cutthroat politics usually reserved for corporate high-rises or the halls of Congress.

These teens aren't just growing into cynical, malevolent adults -- they're already there.

Interestingly, even though the school is ethnically diverse, even predominantly kids of color, racial animus is not what divides the five factions who have staked out their turf like preppy street gangs.

The most powerful is the Spades, led by Selah Summers (Lovie Simone, going places), who control the illicit narcotics trade. The fact that Selah and her squad are black and deal drugs is not presented as a reflection of wider society, but simply how the balance of power has played out in this particularly little chunk of it.

As the story opens, the leadership and spheres of influence have stayed mostly stable after a contentious war a couple of years ago. The other factions are the Bobbys, led by Bobby (Ana Mulvoy-Ten), who run the illegal dorm basement parties; the Skins, led by Amber (Francesca Noel), who oversee gambling; the C's, led by Tarit (Henry Hunter Hall), the brains who sell essays and other homework; and the Prefects, led by Two Toms (Evan Roe), who run interference to keep the adults ostensibly running the school in the dark.

The Spades and the Bobbys are the dominant clans, essentially the Montagues and Capulets of this star-crossed school, though there are no romantic crossovers. Indeed, there's no love lost at all.

Simone is a treat as Selah, who puts off a vibe of strength and confidence but is quite the turmoil of self-doubt underneath. Her mother (Gina Torres) drives her for utter perfection, seeing a 93 on a test in a subject Selah has struggled in not as an improvement to be celebrated but a failure ripe for scolding: "Where's the other seven points?"

As the spring semester of senior year unfolds, Selah would seem to have plenty of reason to coast. She rules the inter-faction council that meets to collaborate and hash out differences like a grande dame at the ball. She has a solid right-hand man in Maxxie (Jharrel Jerome), who keeps the books and handles the da-to-day. The only real task facing her is choosing a successor to take over the Spades after graduation.

Selah thinks she may have found a ripe target in Paloma Davis (Celeste O'Connor), a newly arrived underclassman who works for the school newspaper and is always about, watching and taking pictures. Selah takes her under her wing, shows her the ropes and then in classic "All About Eve" fashion, begins to resent her hand-picked protégé.

I liked a lot of things about this movie, even as I recognized Poe had gathered some very interesting pieces without quite figuring out how they all fit together. The rivalry between Selah and Bobby holds a lot of untapped potential -- I kept expecting things to build to a "Godfather" level of strife, but after occasional verbal clashes things always settle down.

Jesse Williams plays the school headmaster, who occasionally turns up to give speeches that make it sound like he knows all about what's going on under his roof, though he never seems to do anything about it.

It's also unclear how the Spades and the other factions keep the sheep in line. On a couple of occasions they corner someone who's gotten out of line and give them a few bruises, but there isn't even so much as a brass knuckle in terms of ratcheting up the threat. Seems like all it would take is a little firepower, or surreptitious video, to take down the whole system.

What we end up with is a titillating but somewhat disappointing tale that doesn't meet us at eye level. "Selah and the Spades" feels more like a parable than a realistic story about children playing a high-stakes adult game.

Posted by Christopher Lloyd at 3:44 PM