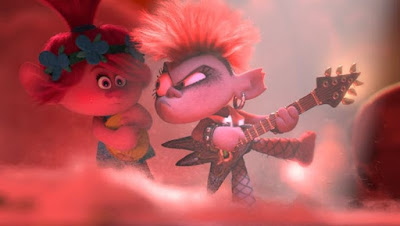 "That was amazingly better than the first one."
--Joel Lloyd, 9


So sayeth the target audience for "Trolls World Tour," the sequel to the 2016 animation hit based on those scary-cute dolls with neon hair and, apparently, golden singing pipes.

Back then I recognized "Trolls" for what it was -- craftily-made entertainment that parents would find tolerable but designed to dump straight into the bloodstream of their offspring like some beat-driven pharmacological candy. A mite cynical, mayhaps, but undeniably skillfully executed.

So here's the next one, and truth be told I actually dug it more than the first.

The song playlist is maybe not quite as good but the story's actually got a little meat on the bone, as Poppy (voice of Anna Kendrick), Branch (Justin Timberlake) and the rest of the troll popstars find out the world -- both musically and otherwise -- is a lot bigger and more complicated than they took it for.

It turns out the trolls of the original movie are merely one-sixth of the species, representing the pop music segment in a spectrum that's been divided up by genre. The others are rock, funk, classical, country and techno. According to the long-ago-but-just-rediscovered lore, the troll tribes went their separate ways long ago because of their musical differences, each taking with them one magical string from the mythological harp encompassing all things tuneful.

Now I now what you're saying: how does techno qualify as part of a proposed hexad representing all music? Does jazz fall under rock or funk or even classical? And where's a capella? Or folk? Or swingtime? Or punkabilly?

Don't worry, the filmmakers -- director Walt Dohrn and a small army of screenwriters too lengthsome to list -- get around to recognizing that their framework involves a whole lotta square-peg-pushin' into them proverbial round holes.

My favorite acknowledgement of this is the deployment of four sets of bounty hunters just as diverse as the rogues' gallery of industry colleagues from "The Empire Strikes Back." These include smooth jazz, K-pop, yodeling and reggaeton, marginalized outcasts each vying for their own (very) little piece of real estate in the troll world.

It seems the queen of rock, Barb (?!?), voiced by Rachel Bloom, is determined to take over all the other troll countries, steal their magical strings and weave them onto her mighty guitar to strum the Ultimate Power Chord, which will instantaneously remake the troll universe in something akin to Thanos' Infinity Gauntlet, though less mass genocide-y, this being a PG-rated kids' movie.

Like Poppy, Barb has recently risen to the throne of her monarchy, similarly inheriting her mantle from an over-the-hill dad. Hers is voiced by Ozzy Osborne, riding a motorized wheelchair decked out in leather and spikes. He needs a little help with making the devil's horns gesture these days, rebellion and agedness making poor companions. She's not truly evil, just misguided, though it turns out Poppy is, too.

There's some stuff about Branch wanting to take things to the next level romantically, which must be neck rubs or something, since they don't even get a closing-shot kiss. Trolls are all into hugs and friendship but are quite conspicuously chaste, even being revealed to reproduce asexually through their bountiful wellspring of hair.

Kelly Clarkson provides the voice of the country & western queen, with a Dolly Parton 'do and a mournful wail upon her lips. George Clinton and Mary J. Blige head up the funk realm, which has Wakanda-like technological superiority over the other trolls, cruising about in their spaceship.

The leaders for techo and classical are one-noters, quickly written off into the background.

Sam Rockwell turns up as Hickory, a derring-do man of mystery from the country side who breaks Poppy and Branch out of jail. He also provides a romantic threat, what with his rust-colored jaw scruff and even chest hair, which by troll standards makes him a 6th-grader amongst kindergartners.

He also has four horse-like legs, which might seem unusual except that the funktown inhabits are quadrupeds as well, though theirs are more camel-like. The technos are actually underwater creatures with fins, though this somehow gets lost during the big togetherness concert at the end, where all differences are recognized and celebrated.

Like the original, "Trolls World Tour" is colorful, bright (almost blindingly), fast-paced and keeps a light touch. There's a fairly sophisticated message inside this sugary confection, which is that being different isn't bad, unless we try to impose our preferences on others, or fool ourselves into thinking our culture doesn't bleed into others and vice-versa.

It'll mostly go over the heads of the kiddos, but grownups will be there to catch it, and maybe appreciate a toss with a little more zip on it.

P.S. In a world gone suddenly topsy-turvy, ain't it nice to have one high-profile flick eschew the pack and still release on the same date it was supposed to, even if it's in your living room? I for one hope the theatrical model returns from its slumber, but one way or the other movies will always be there for us, if we are for them.

Posted by Christopher Lloyd at 11:26 PM