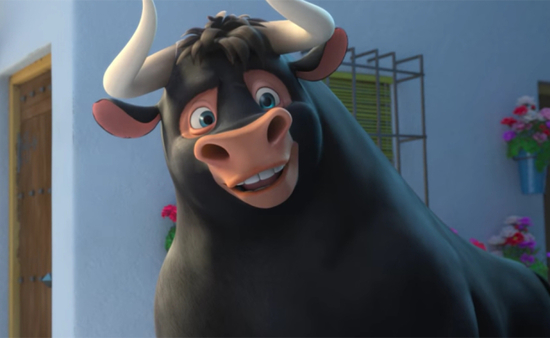 It's interesting that the two best animated films of the year -- "Coco" and "Ferdinand," in that order -- have an overt Latin theme. "Ferdinand" is set in Spain against the backdrop of the popular national sport of bullfighting. It is an egregiously cruel and useless endeavor, but rather than take angry shots at bullfighting, "Ferdinand" shows us the pull of the opposite of aggressiveness and violence.

"Ferdinand" is a film about love, but also about masculinity. It's no mistake that there are literally zero female cows in this story, which focuses on young bull calves and later grown adults. They have been reared their entire lives being taught that the best -- and only -- joy in their lives will come from being selected by a matador to fight in the ring.

The matadors are, of course, still batting 1.000 in the ongoing contest, but the bulls don't know that. They are bulls, so the only legitimate form of behavior is to be aggressive and competitive with all other bulls.

Sound familiar? The nexus of sports and male behavior is often a toxic space.

Then along comes Ferdinand, a gentle little calf who prefers sniffing flowers to fighting. He's mocked by the other young bulls at the Casa de la Toro, a breeding and training ranch for their kind, and not a little bullying takes place. But he eventually escapes that crucible and grows up on a remote farm raised by a gentle girl, who nurtures that side of him.

And grow he does. Ferdinand ends up as a truly monstrous-sized bull, bigger than even than the greatest champion bulls of old. But he doesn't care about being the biggest or the strongest -- he just enjoys his life of quiet and peace.

(He is voiced by John Cena, which is a rather contradictory choice for a character who hates battle. I guess you could argue that since Cena is a fake fighter, that makes it somehow OK.)

Later Ferdinand finds himself back on the bull ranch, where he's once again forced to vie for a spot in the ring, or be sent to the meat factory next door.

He finds that his old tormentors have grown up, and added a few new faces. There is Valiente (Bobby Cannavale), chief bully and enforcer of the bull code. Peyton Manning does the voice of Guapo, who acts as Valiente's wingman but has star aspirations of his own. Anthony Anderson is Bones, the undersized bull who joins in the treatment of Ferdinand, mostly because he would be the next logical target.

David Tennant does the voice of Angus, a woolly bull from Scotland who can't see very well because of the long hair in his eyes. And Tim Nordquist is Maquina, the result of genetic splicing who doesn't speak much and has very robotic qualities.

Kate McKinnon delights as Lupe, a "calming goat" assigned to Ferdinand to keep him chill, but ends up acting as his bullfighting coach. She's a typical animated sidekick, mostly there for comic relief, but she also provides a lot of heart and not a little wisdom.

"Ferdinand" has all the ingredients for an enjoyable kiddie flick -- plenty of action, cute critter antics, a bit of gastrointestinal humor. But it's the deeper themes that give the film surprising weight and meaning. Just like the bull who prefers flowers, this is a different kind of animated film that wants to do more than merely entertain.