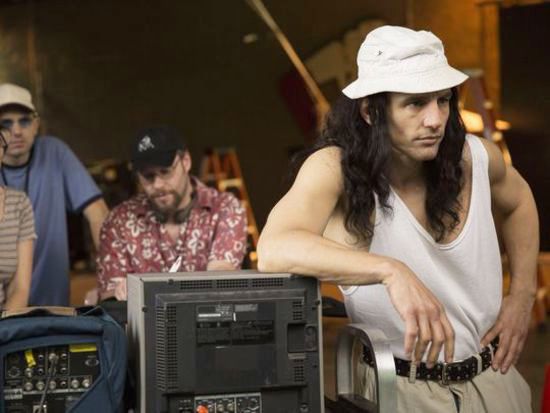 I am a virgin to “The Room,” at least the movie from end to end, though it exists as such a monumental cultural touchstone now that it’s impossible to be totally ignorant of its sideways charms.

Often called “the Citizen Kane of bad movies,” it has gone on to become a cult hit for its atrocious acting and nonsensical plot, with people packing midnight screenings to howl in laughter and shout out the dialogue in unison with the film, the same way their parents did for “The Rocky Horror Picture Show.”

Google it and you’ll find a multitude of gifs and memes, often centered around writer/director/producer/star Tommy Wiseau’s hilariously inept line delivery (“You’re tearing me apart, Lisa!”), vague Eurotrash accent and odd looks -- like an ‘80s hair band singer unaware of the passage of time and the fading of fame.

Showbiz people have long been fascinated by “The Room” and Wiseau, and indeed “The Disaster Artist” begins with a montage of (mostly) recognizable celebrities talking about how gobsmacked they were by the film. Director and star James Franco, along with screenwriters Michael H. Weber and Scott Neustadter, have clearly created their movie as combination homage to/mockery of Wiseau.

He may have been a ridiculously inept filmmaker, but nobody can deny the man his commitment and passion, reportedly sinking $6 million of his own money into the project. No dummy, Wiseau has spent the years since “The Room” came out proclaiming that he meant it to be a comedy all along.

James Franco nails Wiseau’s Schwarzenegger-meets-Phonics speech patterns and odd affectations, and we get a great deal of amusement out of him and the film. I’m not sure if the movie ever truly gets us deep inside his head and reveals what makes him tick. As the closing scroll reminds us, to this day nobody is exactly certain of where Wiseau is from, how he got his fortune or even his real age.

Tommy befriends a wannabe teen actor, Greg Sestero, played by Franco’s real-life brother, Dave. Together they move to Los Angeles to be struggling young actors… although they don’t really struggle too much, as Tommy drives a white Mercedes and already had an apartment in L.A. in addition to the one in San Francisco. He resists any questions about his background, claiming to be from New Orleans, or the source of his prodigious wealth.

Greg is tickled to have someone supporting him financially and emotionally, and the pair set about the usual round of auditions and agency interviews, with hilariously predictable results.

At an acting class, Tommy is distraught when the teacher tells him he’s a natural screen villain, refusing to be laughed at or placed in a box. To buck him up, Greg says he should make his own movie, and we’re off to the races.

Tommy cranks out a script, drops a load of cash on a fourth-rate movie studio and hires a bunch of film veterans before they’ve barely finished their introduction. Seth Rogen gets in a lot of comic digs as the script supervisor who often acts as the de facto director, as Tommy’s on-set antics and abuse continue to spiral as the shoot goes along.

June Diane Raphael, Ari Graynor, Josh Hutcherson and Jacki Weaver play members of the cast, actors who desperately want a paying gig on a feature film but soon recognize they’ve signed up for a one-man disaster parade. They’re the real unsung heroes of “The Room.”

The primary dynamic of the movie is the relationship between Tommy and Greg, who gets cast as the second lead in “The Room.” Greg gradually begins to realize he must separate himself from Tommy’s chaotic influence, helped by the urging of his new girlfriend (Alison Brie). The Franco brothers play off each other very nicely, keeping things comedic without tipping over into daffy.

Bad movies are not exactly a novel concept for good filmmakers. Tim Burton’s “Ed Wood” lampooned a man far weirder than Wiseau. “Troll 2” might argue about which film truly deserves the crown of “Best Worst Movie,” as it also had a documentary made about it that used that title.

“The Disaster Artist” is a very fun and entertaining film that amuses and informs, without every truly getting below the surface of these characters. Purely on amusement factors, I give it Hi Marks.