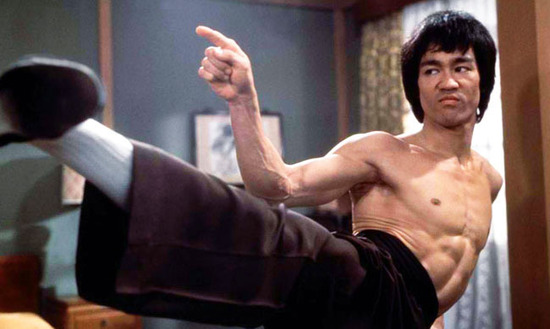 
This is the question I ask about literally every martial arts movie made, ever.

I was surprised to discover that Bruce Lee asks it himself in "Enter the Dragon," perhaps the most iconic such film. The fact the movie makes a bit of a joke out of the proposition that one well-placed firearm could render its entire plot moot doesn't change the fact that it's still hard to take such flicks seriously given this reality.

The truth is the world's greatest kung fu (or name your discipline) master is hopelessly outclassed by your average twitchy junkie with a Saturday night special. The real world doesn't actually work like in that Remo Williams movie.

I just plain don't care for "chopsocky" movies, as they're derisively known. For awhile you're impressed with the pure athleticism, the exuberant kinetic flow. But it soon gives way to a maddening, repetitious drumbeat of chops, punches and kicks. I mentally refer to it as "I-kick-you-you-kick-me-we-kick-each-other" action.

Give me a real story with authentic characters that has some martial arts layered in, like "Crouching Tiger, Hidden Dragon," and I'm all on board. But I can't take 90+ minutes of endless hand-to-hand combat. As Arnold Schwarzenegger said when they were shooting "Pumping Iron," the audience might like muscles but you've got to have something else going on besides a bunch of guys flexing.

Lee choreographed all the fights in "Dragon" in addition to being its star, his final movie before dying of cerebral edema at the tragically young age of 32. He was actually in the process of completing his ADR -- dubbing over the dialogue recorded on-set -- for "Dragon" when he died.

Like James Dean, his greatest stardom only came after he was gone.

I get why Lee became such a cinematic legend, despite starring in only a handful of movies. He was handsome and charismatic, with one of the first well-known iterations of the body type preferred for men in popular culture these days: very lean and cut, with virtually every muscle striation and tendon popping out of the skin. Bruce Lee had a six-pack before anyone even knew what to call it.

He had a very soft way of speaking, slightly clipped with a medium-ish Hong Kong accent, and an almost musical cadence to his speech.

I still can't wrap my head around his utterances while fighting: animalistic falsetto yips and hoots as he slammed opponents, often preceded by drawn-out strangled, taunting notes. He sounded like a monkey trying to swallow a cat.

From what I've been able to gather, it has no legitimate basis in martial arts and was just something Lee did to attract attention. Honestly, it seems pretty girly and goofy to these ears. But it's become an indelible part of his iconography.

Ask any kid in the late 20th century to imitate a martial arts master, and they'd probably lift their hands in a splayed-finger crane stance while doing a (not terribly) exaggerated version of Lee's "whhhaaaaaoooooaaaahhhhh!" thing.

The plot of "Dragon" -- directed by Robert Clouse from a script by Michael Allin -- is as nonsensical as can be. Lee (also his character's name) is the best fighter at the Shaolin Temple, and is tabbed to go after Han (Shih Kien), his predecessor who turned against the mystical teachings to open his own martial arts academy on a lonely Pacific island.

He's doing so on behalf of three parties: the British government, which is ready to swoop in with a military operation but needs proof of Han's illicit drug activities; the Shaolin leadership, who are affronted by Han's betrayal of their ethos; and Lee's family honor, which was offended when his sister was killed by Han's bodyguard, O'Hara (Robert Wall), some time earlier, which Lee has just found out about from his father.

It's a good thing the revenge element was added in, because otherwise the whole operation makes no sense. According to Braithwaite, the British operative played by Geoffrey Weeks, "We know everything, but can prove nothing" about Han's narcotics activities. He insists their military forces can't intervene without proof. Really? Han's island belongs to no country, so there's nothing stopping the Brits except colonialist restraint.

The second reason is even weaker. Why do the Shaolin care of one if their former students started his own martial arts academy? Are they afraid of the competition? Are all of their students required to swear lifelong fealty? Their obsession with killing Han and wiping out his school seems awfully petty and vindictive for a bunch of serene mountain monks.

It turns out Han runs his academy, and holds an international competition every three years, all as a means to recruiting new talent for his drug operation. Those who do well are given the "offer he can't refuse" treatment.

Lee's other main competitors are Roper, a down-on-his-luck gambler played by John Saxon, and Williams, an unorthodox African-American fighter played by Jim Kelly. The two actually know each other from their service in Vietnam, and form a quick alliance.

(Kelly, by the way, would go on to become one of the first blaxploitation stars, parlaying his martial arts abilities and notoriety from "Dragon" to star in "Black Belt Jones" the following year.)

Both men freely partake of Han's offer of feminine companionship. Williams chooses no less than four girls -- apologizing for being tired from his trip, or it'd be more. Roper goes for Tania (Ahna Capri), the Caucasian woman who acts as Han's emcee.

Lee eschews sex to sneak around the island at night looking for evidence, getting into fights with various Han henchmen who never seem able to identify who their attacker was afterward. I guess a bunch of Asian guys can't distinguish between one of their own and a white guy or black guy, either of whom stand a head taller. Whatever.

There are several "boss fights" throughout the story, building up from an obnoxious fellow competitor  (Peter Archer) to key henchmen to Han himself. In addition to O'Hara there is Bolo (Bolo Yeung), a musclebound fighter. Both go down rather easily at Lee's hands... or rather, feet.

Another supporting character is Mei Ling (Betty Chung), an operative sent in by the British months ago who disappeared. Lee soon locates her, and we're never clear on what she had been up to all this time.

Han himself is an interesting figure. Kien was 60 years old when the film came out, and he (or his obvious stunt doubles) aren't particularly athletic. He wears his hair in an impressive widow's peak pompadour, though when it gets mussed up during the fights it is unmasked as an elaborate combover of Trump-esque extravagance.

The most notable feature about Han is his hands, which are revealed to be metal prosthetics. At one point he takes Roper on a tour of his personal museum, which largely consists of various hand skeletons and replacements from antiquity. He pauses before a particular set of bones, and it's suggested that his hands were not injured but amputated by choice.

We can see why: he easily bests Williams using his impervious hands. And, of course, there's the final showdown with Lee where Han swaps out one of the hands with a Wolverine-like set of claws, using them to leave the famous triple trails of aesthetically-pleasing-but-tacticallly-inconsequential bloody scratches on his face and chest.

Interesting thing: after trapping Lee in a funhouse of mirrors, Han manages to sneak up behind Lee. Rather than just impale him with those long claws, he goes for another scratch on the shoulder. One gets the sense Han isn't trying to defeat his opponent, but tenderize him.

To end with the beginning: so why doesn't someone just sneak a handgun onto the island and take out Han? (Or better yet, a long rifle with a scope.) "Enter the Dragon" answers this fundamental question by not answering it. This is not the sort of movie you're supposed to think about in any depth, but shift your brain into neutral and enjoy the popcorny action.

Bare-handed combat is impressive to look at on a movie screen, but something humans evolved past hundreds of thousands of years ago. If you really want to put someone down, what's the smarter way to go: get a gun or spend decades in arduous martial arts training in the hopes the guy hasn't brains enough to arm himself with something capable of dealing damage from more than five feet away?

I mean, at least get a shuriken or something, dude.