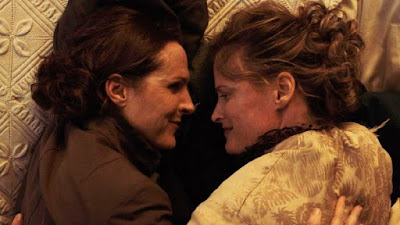 I admit I'm not sure how to take "Wild Nights With Emily," a portrait of poet Emily Dickinson in the latter years of her life. Certainly it's comedic, and the spare settings and deliberately stilted dialogue delivery make it feel like a "Saturday Night Live" spoof of period costume dramas. It's easy to poke fun at that sort of thing, and I enjoyed many a snigger.

But there's an undercurrent of anger here, too. Writer/director Madeleine Olnek wants to reclaim Emily's image as a reclusive spinster who knew not love or fame during her lifetime.

Instead, she's portrayed -- by "SNL" alum Molly Shannon -- as a vibrant if awkward woman desperate to be published who carried on a lifelong love affair with her childhood friend, Susan (Susan Ziegler), who married her brother and lived in the house next door.

The romance between the two (which is hardly supported by a consensus of scholars) is my favorite part of the movie. The Susan of this portrait was not just Emily's sister-in-law and lover, but editor of her nearly 2,000 poems and a constant source of encouragement and support. Active in society, she urges publishers and other poets to take notice of the genius next door.

Dickinson's disjointed, non-rhyming, untitled poetry was well ahead of its time, and it's funny to see a parade of stolid, unimaginative men parade into her parlor and declare her work unworthy of print. Easily the most delicious is Thomas Wentworth Higginson (Brett Gelman), editor of the Atlantic, whose buffoonery and priggishness are available in ample measures.

(He was actually among the first major publishers of her work, though viciously edited to conform to the conventions of the time.)

The villain of the piece is Mabel Todd (Amy Seimetz), a younger social climber who played piano for Emily (from downstairs) and, after the poet's death, became her chronicler and champion -- but of a deliberately skewed picture. The film depicts her as literally erasing Susan's name from Emily's love letters, something later confirmed by spectrographic analysis.

Mabel also carried on a liaison with Emily's brother/Susan's husband, Austin (Kevin Seal), who's depicted as a blundering idiot completely unaware of the love affair passing literally in and out his doorstep.

There's much to admire about "Wild Nights with Emily" but no much to savor, unless you're a fan of Dickinson's poetry, which is often read underneath or as part of the scenes. Most people first encounter poems in a school setting, dooming them to dislike the experience when it's force-fed to them.

Some of that same sort of aftertaste lingers with this film, which often feels more like a thesis than a portrait.

Posted by Christopher Lloyd at 5:08 PM