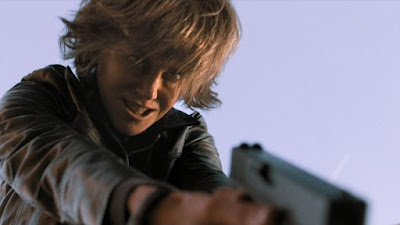 Nicole Kidman has de-glammed for roles before, mostly notably putting on a prosthetic nose to play Virginia Woolf in “The Hours,” for which she won an Oscar. That’s a pretty standard M.O. in Hollywood: get grizzled, get Oscar gold.

The boys do it too: see Matthew McConaughey in “Dallas Buyers Club.”

But Kidman goes beyond unadorned to downright fugly in “Destroyer,” a hard-edged drama in which she plays a police detective who’s been spiraling toward the bottom for years. With her face mottled, eyes like two dim lamps peering out of dark holes, Erin Bell looks like she’s stared into the face of the devil and slowly gotten crispy.

She’s a boozer, a user, a cop who seems to spend very little time actually investigating crime. Seemingly sleeping out of her police car, she’s following up on an old case that involves an undercover operation she was in years ago.

It centers around Silas (Toby Kebbell), a drug dealer who inspires fear and loyalty in his crew. And there was Chris (Sebastian Stan), the fellow cop who posed as half of a couple with her and led to a real-life romance.

Other players include Erin’s estranged teen daughter, Shelby (Jade Pettyjohn), who’s about to make some bad choices with her scuzzy boyfriend, and Bradley Whitford as a wealthy lawyer involved with the drug trade.

Directed by Karyn Kasuma from a screenplay by Phil Hay and Matt Manfredi, “Destroyer” is a tough watch but a rewarding one. Kidman deserved the Oscar nomination she didn’t get, not for just taking off her makeup but for putting on the face of self-destructive character who worms her way under your skin.

Bonus features are sparse in quantity but long in quality.

There are two separate feature-length commentary tracks, one by Kasuma -- pity Kidman did not join her -- and another with the script men. Plus there’s a making-of documentary, “Breakdown of an “Anti-Hero: The Making of Destroyer.”