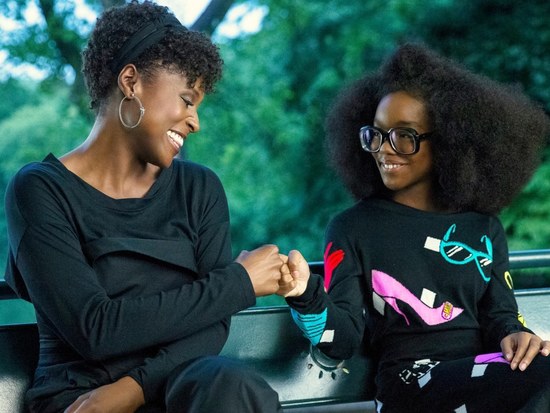 In Hollywood they say everyone secretly wants to direct, but the smart ones really want to be producers.

Marsai Martin, who plays one of the kids on the TV show "Black-Ish," supposedly pitched the idea for "Little" when she was 10 years old, inspired by the seminal Tom Hanks comedy, "Big." At age 14 she's now listed as executive producer of the body switcheroo comedy she stars in, the youngest person in Hollywood to receive such a credit.

It'd be an inspirational story, except for the fact that "Little" is so loudly, aggressively awful.

The setup is that instead of a 13-year-old transforming into a 30-year-old body, a grown woman played by Reginal Hall has a curse put on her that turns her back into her 13-year-old self. Rather than entering the adult world and charming everyone with their childlike innocence and imagination, here the protagonist is already a world-weary stiff who must rediscover what it means to be a kid.

(We pause here to remember "Big" director Penny Marshall, who passed away recently and never got the recognition she deserved as a filmmaker, including never being nominated for an Oscar.)

"Little" is directed by Tina Gordon ("Drumline") from a script she co-wrote with Tracy Oliver. The set-up is that Jordan Sanders it the 38-year-old owner/CEO of a tech company. She's rich, has a fabulous wardrobe, drives a BMW i8, is on the cover of magazines -- and is a total rhymes-with-witch.

When she's abusive to a food truck owner's kid, a wave of a magic wand means she wakes up the next day occupying the same body she had 25 years ago, right down to the frizzy hair and awkward glasses.

(Interestingly, she doesn't regrow the braces she had as a kid, so it's curious why she suddenly needs glasses again. Can kids not wear adult contacts? Or did the LASIK wear off?)

The biggest mistake the movie makes is making Jordan SO irredeemably nasty, both as an adult and a kid, that we can never relate to her as a person. How awful is she? Her employees are utterly terrified of her, scuttling away when they see her coming. When one fellow dares to eat an apple at a pitching meeting, she grabs it, licks then entire skin and then demands he take another bite.

There's movie-mean, and then there's she-would-get-sued-after-a-single-day-mean. One's funny, the other is not.

Jordan's middle school adventures are as predictable as you think. She encounters a new generation of nasty cheerleaders running the show, and a trio of uber-nerds who think they're going to be suddenly released from their prison of uncoolness if they compete in the talent show. You can take a wild guess where the movie's big finale winds up.

Issa Rae plays April Williams, Jordan's put-upon assistant who secretly has big ideas for an app that she's never been able to pitch. With Jordan sidelined to kiddie school, April has to take over the wheel of the company, with mixed results.

Rae has plenty of onscreen charm, but the script doesn't give her a lot to do but react to Jordan. I would love to see her in her own romcom vehicle.

The sexual dynamics of "Little" are... uncomfortable. Jordan has a gorgeous boyfriend, Trevor (Luke James), who she has listed in her phone contacts as "D-Boi." Google it for the NSFW definition, but suffice to say that she only keeps him around for sex. But, of course, Trevor has a heart of gold and secretly wants more. When he sees little Jordan, he takes her for Jordan's daughter and immediately wants to daddy her.

Really? What kind of dude lets himself be treated as sexual appendage, except for someone who's looking for the same?

Then there's Gary Marshall (Justin Hartley) -- hello inside joke -- Jordan's dreamy teacher at middle school, upon whom she attempts to put the moves despite having a preadolescent body. She actually does the same thing with Trevor, so it's a whole next-level thing of creepy.

There's even a musical sequence that seems to spring out of absolutely nowhere, with Jordan suddenly writing on a bar like Michelle Pfeiffer in "The Fabulous Baker Boys."

Martin has a lot of spunk, but the story is basically just an excuse for her to vamp in costly clothes and make smug expressions for the camera. There isn't a defined character underneath all the mugging, and what there is we can't stand.

Posted by Christopher Lloyd at 4:56 PM