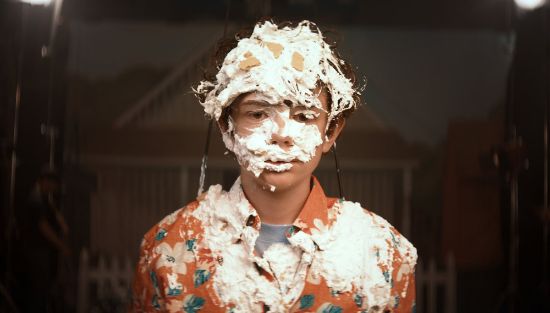 Maybe you, like me, have been scratching your head over the antics of Shia LaBeouf the past few years. The arrests, the publicity stunts-slash-performance art, the public drunkenness, the lawsuit alleging plagiarism, the questionable choices of roles. For the rare child actor who successfully transitioned to adult movie stardom, he seemed to be taking great pains to screw it all up.

I’d noticed he was doing more interesting work more recently with nicely layered performances in small indies like “American Honey” and “The Peanut Butter Falcon” -- in supporting parts, no less.

His comeback, if you want to call it that, reaches a higher plane with “Honey Boy,” which LaBeouf again stars in as a supporting role, but for which he also wrote the screenplay. With parallel storylines set in 1995 and 20005, it’s about a 12-year-old actor breaking into Hollywood on a kiddie TV show and then breaking down in alcoholism and arrests as young star on the verge of flaming out.

If that sounds familiar, it’s because this is indeed an autobiographical tale about LaBeouf’s own youth, particularly his troubled relationship with his father. The names and some details are switched around, but it’s indisputably LaBeouf casting a critical lens at his own life and mistakes.

Rather than feeling like another cloying act of narcissism -- like when LaBeouf attended one of his premieres wearing paper bag that said “I’m not famous anymore” -- “Honey Boy” has the flavor of an authentic self-exploration that’s also artistically vibrant and alive. It would make for an interesting story even if it were invented out of whole cloth.

In a daring act, LaBeouf -- even though he’s youthful-looking enough to play himself in the adult section -- casts himself as his father, here called James. This is not a “Mommie Dearest” sort of takedown of a parental figure, though the film does not try to obviate James’ failings as a parent, which range from emotional domineering to criminal neglect and occasional physical abuse.

Instead, it shows a willingness to embrace his father in all his fractured complexity. A war veteran and itinerant rodeo clown whose blackout drinking binges led to hard time in prison, James is now a lonely, somewhat pathetic figure whose “job” is to act as chaperone and acting coach to his son, who is a featured player on a Disney-esque TV show.

Despite the glamor of working on a studio lot every day, Otis (Noah Jupe) and James have anything but a hifalutin home life. They tool around on an old motorcycle to a dilapidated motel populated by people living on the trashier edge of Tinseltown.

James brusquely slaps away Otis’ attempts at holding hands or leaning a head on a shoulder while riding the motorcycle. With thinning long hair and owl-like glasses, LaBeouf as James resembles a hippie-turned-hardcase, who sprinkles his exhortations liberally with f-words and put-downs, like making disparaging comparisons about the size of their genitalia.

In the adult sequences, Lucas Hedges takes over the role of Otis. We first meet him dangling from some stunt ropes after a movie set filled with explosions in a very “Transformers” sort of way. He quickly gets drunk and crashes his car, leading to court-ordered rehab.

A solid supporting cast includes Laura San Giacomo as Otis’ therapist; Byron Bowers as his rehab roommate; and Martin Starr as one of the counselors. In the boyhood storyline FKA Twigs plays a shy older girl who lives in the motel room across the way. As James’ abuse reaches its zenith, Otis seeks out a mostly unspoken romance with her. Clifton Collins Jr. has a nice, small part as Otis’ ultra-cool Big Brother, Tom.

“Honey Boy” is directed by Alma Har’el, who’s made some notable documentaries (“Bombay Beach”) and makes her feature film debut here, as does LaBeouf as a screenwriter. It’s a fruitful partnership with a compelling narrative that sometimes wanders into and out of Otis’ dreams, or wishes.

People, including me, tend to mock millionaire showbiz types who seem incapable of dealing with lifestyles most of us would regard as a cakewalk. I don’t think LaBeouf made this movie to explain or justify his behavior, but simply to relate his own truth in an honest, empathetic way. This he does.