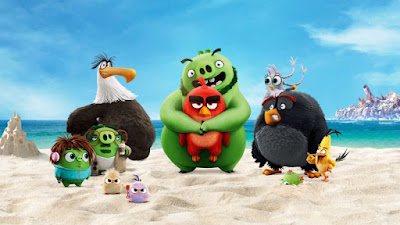 If you’ll recall from the based-on-a-video game setup: a diverse array of flightless birds live happily on an island. They are constantly beset by their enemies, the bright green pigs from across the waters who want their eggs.

Red, the hot-headed outcast voiced by Jason Sudeikis, managed to devise a way to beat the porcine interlopers, led by King Leonard (Bill Hader), and earn a little status among his peers, too.

Now they find a common enemy in Zeta (Leslie Jones), who leads a secretive third island inhabited by eagles. It’s a frozen wasteland, and she wants to take over the other two islands to improve her chilly digs.

“The Angry Birds 2” is low-ambition animated fodder for kiddies. There’s nothing wrong with that, and I’m all in favor of families having wholesome stuff on Blu-ray/DVD when you just need the kids to settle down for a while.

I just wish people could try a little harder than this.

Bonus features are quite healthy, and include a new short film, “Live Stream,” as well as six mini-movies starring the Hatchlings -- a crew of cutesy young birds who get into scrapes during the movie.

There’s also a travelogue of the real birds who inspired the animators; Thanksgiving featurette; a Christmas-themed singalong; a making-of documentary short, and more. There are also three DYI family features on how to make your own pig snot, volcano and popcorn balls.