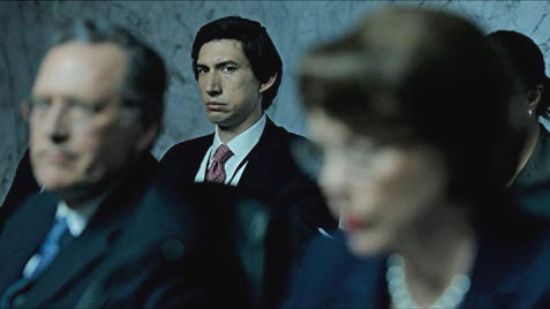 Near the beginning of "The Report," one character remarks that it's going to be very difficult to tell their story in a way people can understand. This is very much the filmmakers speaking through them to the audience, essentially warning us in advance about the complicated tale they're about to spin.

The good news is they tell this story about as well as it can be told. I'm reminded of "The Big Short," which managed to weave a complex tale with lots of moving parts into a coherent, impactful narrative.

The bad news is I fear too many people don't want to hear about the "enhanced interrogation techniques," or EITs, employed by the U.S. government in the years after the 9/11 attacks, or the (largely successful) attempts to sweep them under the rug. It's old news.

The report the title refers to was one issued by the Senate Intelligence Committee in 2014 after more than five years of careful and methodical investigation by a small team of congressional staffers. It essentially laid out its finding that the CIA abused detainees using quasi-scientific methods that were justified with out-there legal theories.

Of course, the powers that be took great pains to water down this investigation, first by refusing to allow any witnesses to be interviewed. Later they went so far as to break into the investigators' supposedly secure office in a CIA building in a move that was about two lawyerly briefs away from the Watergate plumbers.

Adam Driver shines as the hero of the story, Daniel Jones, and for once it's about a real guy and not some made-up Hollywood "amalgam" of people, like they usually do with movies like "Zero Dark Thirty." Jones actually has a scene where he sees an ad for that movie while he's working furiously to get the findings of his report published, and just about snorts.

"The Report" is basically an investigative whodunit in the mold of "All the President's Men," with distinct phases. It frames the ongoing work of the investigators between 2009 and 2014 with flashbacks to the actual events at the "black sites" operated by the CIA in 2002 and thereafter. The recreation of the EITs (many people call them torture) are truly stomach-churning.

In the first half, the main bad guys are a pair of quack-ish psychologists who first pushed the notion of EITs, which were based on actual rigorous training American military personnel undergo to prepare them for the possibility of being captured. This includes nasty techniques like stress positions, sleep deprivation, humiliation through slapping or forced nudity, and the now-infamous act of waterboarding, which simulates the feeling of drowning.

Played by Douglas Hodge and T. Ryder Smith, the psychologists are portrayed as cowboy amateurs, overruling experienced FBI interrogators who know how to build rapport with a subject. Instead they construct their own waterboarding table based on one they saw in a video.

Watching these detainees, evil men though they were, being so foully mistreated is gripping stuff and propels the first act of the film.

The middle section wanders a bit, as we get further away from the torture in both time and narrative, and the movie turns from the story of an investigation to the attempts to have the report made public. At one point the CIA starts investigating the people investigating them. (Yes, it really happened.)

There are surreptitious meetings with a New York Times reporter, classified documents being smuggled out of buildings, and other familiar clandestine stuff.

Annette Bening gives a strong turn as Sen. Diane Feinstein, the chair of the intelligence committee and Jones' boss. She is portrayed as diligent, un-partisan and persevering while recognizing the limitations of playing by the rules of Washington D.C., where bureaucratic processes take months, or years.

She often has to rein Jones in or yank his leash. It's interesting how their character arcs diverge. At the start, he is methodical and calm while she rages about uncovering the truth, and by the end their roles have reversed. He's hollering about the injustice of it all and she has to coldly read the facts and make the hard calls.

Aside from these two figures, this is a movie where just about everybody comes off looking bad. It is thoroughly bipartisan in its contempt -- first for the Bush administration that set EITs in motion, and later for an Obama White House that was so determined not to dwell on the past that it ended up being complicit in the cover-up.

Obama CIA director John Brennan (Ted Levine, who can scowl with the best of them), a man much in the news these days for other reasons, comes across as the main heavy in the second half of the movie as the spooks push back and try to deep-six the report.

Burns frequently adorns the background with honeycomb patterns or other repeating geometric shapes, like the CIA building where Jones departs from late every evening. It gives us the sense of being trapped in a beehive pervaded by a loud, droning buzz of groupthink.

Whatever your thoughts on the efficacy of enhanced interrogation, it's disturbing to think how our government undertakes execrable practices and then spend years trying to hide that fact from the public. "The Report" is a complex but worthy deep-dive into the abyss we'd rather not gaze at too long.