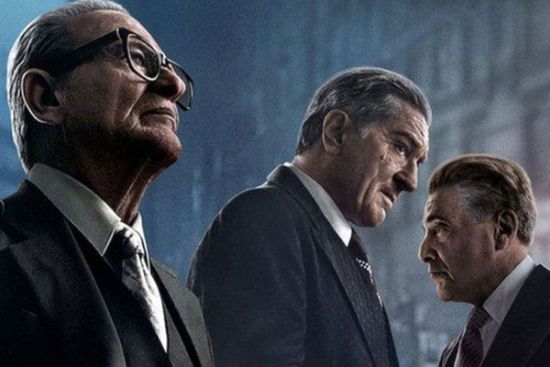 Imagine a 3½-hour travelogue of Martin Scorsese’s gangster filmography. There isn’t really anything new, just riding over familiar themes he’s tread on in his other movies, over and over again. You appreciate the nostalgia tour, but in the end that’s all it is.

Heck, I thought the whole goombah thing was played out back in the days of “Casino.” But here we are a quarter century on, reuniting Robert De Niro with Joe Pesci, who was lured out of virtual retirement, and throwing Al Pacino into the mix.

Although their films share a lot of DNA, Pacino has never been in a Scorsese movie before. All four men are in their 70s now, and “The Irishman” very much as the feeling of ‘one last ride with the old gang, while they still can.’

It’s the story of Frank Sheeran, known by that titular nickname for being the only non-Italian high up in the Bufalino crime family centered around Philadelphia. Frank, played by De Niro, was a war hero who became a Teamsters truck driver and later a local chapter president with the backing of Russell Bufalino (Pesci), the mob boss who had pull in most everything, including the union.

The story, written by Steven Zallian (“Schindler’s List”) based on a book by Charles Brandt, follows Frank from the 1950s to the 1970s, with flashbacks to his World War II days and a framing story when he is an elderly man in a nursing home recalling his life -- seemingly to nobody.

There’s also a framing device within the larger one, in which Frank travels with Russ and their wives on a languid road trip to Detroit in 1975, ostensibly to attend a wedding but really to do a little business along the way, including hashing things out with a troublesome ally, former Teamsters boss Jimmy Hoffa (Pacino).

If you know anything about how or when Hoffa died, it’s not too hard to put together the real import of their trip. The subject of Brandt’s book is also well-known, but for those who aren’t familiar I’ll refrain from revealing any spoilers, even if they are glaringly obvious.

The film uses CGI to “de-age” the actors during the earlier sequences, and for the most part it’s effective enough that you don’t notice it after a while. Russ refers to Franks as “the kid” during the 1950s scenes, though even with digital help De Niro looks more like he’s in his 50s than his 30s. Only the World War II stuff looks cringingly fake.

Frank is a very passive guy for a main character; he’s mostly reacting to other people. Pacino gets the limelight as the charismatic, neurotic Hoffa, constantly blustering and schmoozing. Pesci plays the calm guy, quiet guy you have to watch out for.

Essentially, the three legendary actors switched around their stereotypical roles.

There’s some wonderfully rough dialogue, including aphorisms substituted for dark deeds. For instance, Frank first gains his reputation as an assassin, which is known as “painting houses.” (A home’s wall splattered with blood provides the visual cue.) A final judgment on a guy becomes, “It’s what it is.”

But spread out over 209 minutes, when you put it all together the result is a lot of run-on scenes of guys riding around in cars, sitting in bars, having tangential conversations.


There’s lots of other characters who flit in and out of the story, too many to name them all. A short list would include Harvey Keitel and Bobby Cannavale as big guys in Russ’ orbit; Sebastian Maniscalco as Joseph “Crazy Joe” Gallo, an upstart who likes clam sauce; Ray Romano as the obligatory mob lawyer; and Stephen Graham as Anthony Provenzano, aka “Tony Pro,” aka “the little guy,” who clashes repeatedly with Hoffa.

The female characters are used more poorly than any other mainstream film of recent vintage I can recall. They’re literally mannequins in the background, seen but rarely heard. Certainly they do not say or do anything pivotal. They do not even age like the men do, though who knows if that’s an aesthetic choice by Scorsese or simply a cutback on the film’s famously sprawling budget.

Scorsese casts Anna Paquin as Frank’s daughter, Peggy, and then gives her nothing to do. She stands witness to Frank’s crimes, but is not gifted with the ability to speak about them. We wait for the final confrontation that never arrives. What a waste of a fine actress.

“The Irishman” isn’t a bad movie -- it’s great-looking and Pacino gives a peppy performance as Hoffa. But it’s an overlong elegy for a time gone by, when mobsters were important figures and people made movies glamorizing them. Expiration dates for both are overdue.