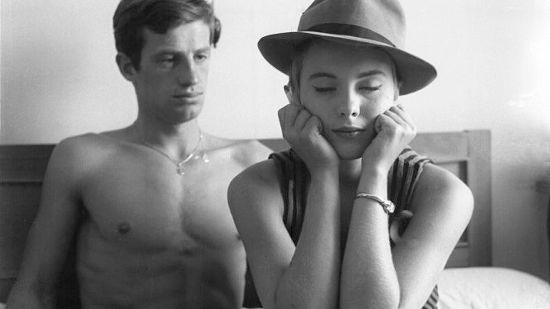 My French New Wave education somehow never included "Breathless," one of the most seminal in the movement of critics-turned-moviemakers and the first feature by Jean-Luc Godard. Alas, I found it as underwhelming as "The 400 Blows" was amazing and transportive. Solid good-not-great category.

"I'll take Truffaut; you can keep Godard" has been my semi-comedic quip about the two most iconic figures of the New Wave, and I found that held true here as well.

My take is Truffaut told stories, while Godard is a master of mood and moments. He seems ensorceled by his own shots, lingering over a face in profile as cigarette smoke wafts across the cheeks. Godard is closer to Terrence Malick in this regard -- more visual stylist than storyteller -- and my reservations about him are well-known.

I'm sure "Breathless" seemed very fresh and daring in 1960, but today it's an artifact of rebellion.

Jean-Paul Belmondo juts out his jaw and and tips his hat low over his eyes in a studied pose of nonchalance. A street hood who idolizes Humphrey Bogart, Michel Poiccard (based on a real car thief), is a self-styled loverboy who treats women like disposable garbage.

He professes to love Patricia Franchini (Jean Seberg) despite having only met her last month and slept with her once. We quickly sense that she is simply the most readily accessible girl to help him escape from the law and underscore his self-image. Bogie always had a looker on his arm, so he must, too. Michel keeps insisting his love to her so much that he comes to believe it himself.

Michel is very much a liar in the George Costanza tradition: he so believes his own lies that they eventually become his truth.

Early on he shoots a motorcycle policeman chasing him in one of his many stolen cars, and spends the rest of the movie making plans to run away to Italy. (It's unclear why Italy; I'm sure the two countries had extradition for murder in 1960. My guess is he figures it'll be easier for him to disappear there.)

But two things hold up his plans: a friend, Antonio (Henri-Jacques Huet), who owes him a substantial amount of money; and Patricia, who he wants to run away with him. She's a 20-year-old privileged American who's quickly climbing the ladder as a journalist, and thus has very little reason to take Michel up on his offer.

She dallies and dithers while ostensibly accompanying him as he waits for his money. He has a check from Antonio but needs cash, and the friend seems to be ducking him. (One wonders why the transaction couldn't be done by mail safely from Genoa or wherever.)

Godard and Truffaut tended to make very male-dominated movies, at least when they were starting out, so it's clear Godard invested most of his screenwriting energy into Michel. (Truffaut and Claude Chabrol contributed the story.) They saw him as a charismatic cad, a playful man/boy who rejected traditional masculine roles like family, career, fatherhood. He is the opposite of stability.

But honestly I found him rather dull as a protagonist. We figure out his shtick pretty quickly and then wait to see how far he'll take it.

Patricia is the much more interesting character, a woman who conveys submissive feminine sensibilities while always remaining steadfastly independent in her attitudes and choices.

Michel steals the key to her appointment and moves into her home, and her bed, without asking permission. However, nothing happens, between the sheets or elsewhere, without her initiative.

"Breathless" was seen as a very sexy movie when it came out, and it still is. Seberg and Belmondo were both compelling subjects for the camera, attractive in non-conventional ways.

She had close-cropped blonde hair and a thin, almost boyish figure, giving her an overtly androgynous presence. Belmondo was a bit horse-faced with one of those noses that doesn't seem that big until you see it from certain angles, and then it's ginormous. Naturally lean in the Brad Pitt mold, he had a six-pack before anyone had words for it.

There's no nudity to speak of, though some thrashing under the sheets leaves no doubt they're having sex, which was pretty risque, at least for American audiences of the time.

Michel has a repeated gesture -- which Patricia later copies -- where he draws the pad of his thumb across his lips in a very deliberate way, which appears to have no purpose other than as a sensual signature. He's also perpetually smoking, with fat unfiltered cigarettes protruding from a half-open mouth.

I'm sure the Freudians had a field day with the film's oral fixation.

Godard and cinematographer Raoul Coutard shot the movie cinema verite style with most handheld cameras and no lighting. It, along with jump-cut editing by Cecile Decugis, gives the film a restless, buoyant energy, like a juvenile puppy who just can't sit still.

Daniel Boulanger plays the police inspector hot on the trail of Michel, fat and imperious. Roger Hanin is Carl, an older journalist who is mentoring Patricia, giving her opportunities to interview a famous filmmaker (Jean-Pierre Melville), while also pressuring her into having sex. Michel follows them and is incensed with jealousy.

It may be this event, more than any actual emotions experienced, that prompt his obsessive behavior.

Belmondo and Seberg both became major international stars overnight as a result of "Breathless." The recent film "Seberg" follows her life later on when was dogged by the FBI for her sympathies with the Black Power movement, with Kristen Stewart portraying her as a woman of immense passion and naivete.

The ending of "Breathless" was deliberately ambiguous, with Michel dying in the streets after being shot in the back by police. With them and Patrician standing over him, he uses his last breaths -- "out of breath" is the literal translation of the title -- to spit insults at her while repeating some face-making expressions they had exchanged earlier in the movie.

She had just turned him into the police, mostly as a way to finally be rid of him, so it could be Michel is genuinely incensed at her. The impish mugging, though, suggest he's talking about the world in general and his own life, about which he seems to have little regard.

My guess is if I were an average filmgoer in 1960 I would have been amazed by "Breathless." It was a new type of cinema that was obsessed with youth and movement. The problem with being enamored with the young is that they don't stay that way, and today the movie feels old, trapped by conventions rather than subverting them.