Review: "Portrait of a Lady on Fire" 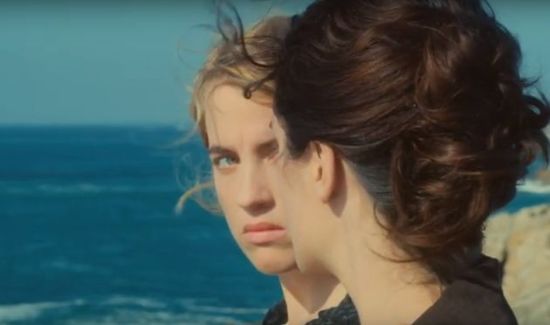 Do all lovers feel like they’re inventing something?
-- Héloïse

I’m not generally inclined toward long, slow-burn period romances. I still recall the lavish praise for “Call Me By Your Name” from a couple of years ago with utter bafflement. I went into “Portrait of a Lady on Fire” with that fear in my mind, and came out entranced.

What an extraordinary achievement by writer/director Céline Sciamma (“Tomboy”). This is a film of haunting beauty and searing emotions.

On a remote island off the coast of France in the 18th century, an ambitious young painter, Marianne (Noémie Merlant) is hired to create a portrait of a wealthy widow’s daughter. Her father is a great portrait artist, and she yearns to follow in his footsteps while seeking a way to emerge from his shadow. Marianne hopes this commission will lead to more.

It turns out this is a nuptial portrait, which is how prominent families arranged marriages back in that era. A painting of the intended bride is sent to the groom to see if he will agree to wed her. It’s like Tinder for the 1700s, though it takes a lot more time and resources to swipe left.

Turns out Marianne is not the first painter hired. In her chambers she finds the portrait by her predecessor, a man, of a woman in an emerald green dress with the face left blank. It appears the subject, Héloïse, is refusing to pose as her way of rebelling against the forced marriage.

Marianne plies the young servant, Sophie (Luàna Bajrami), and learns more about the discontent. As the second daughter Héloïse enjoyed living in a convent. But her sister recently perished in a fall from the cliffs that remains mysterious. It now falls to the younger sibling to wed her sister’s would-be suitor.

Her mother (Valeria Golino) has come up with a plan: hire a female painter to pretend to be her companion. Since there were so few women artists in the day, Héloïse will not suspect. Marianne will study her by day and paint her at night.

The scene of their first encounter is quite a shocker. Héloïse (Adèle Haenel) wears a long blue dress and hooded cloak. She does not even look back at Marianne, but sprints for the cliffs overlooking the rocky beach. Then she stops suddenly, and turns her lovely, sullen face our way. A connection is made.

You can probably guess where all this is heading: the two women become infatuated with each other and commence a short, torrid affair. Marianne actually destroys her first completed painting as an excuse to extend the visit, but also because it didn’t reflect Héloïse’s uncaged spirit.

That’s something she will have to chase for herself.

Sciamma uses her camera to peer voyeuristically at the women, subverting the traditional male gaze as they stare at each other, and are stared upon.

At one point the women wander into a secret outdoor party of the local serving women -- an occasion to chatter, exchange goods and services and enjoy fellowship away from their daily toils. Suddenly a pair begin to hum, and then more begin to sing, and then the rest join in, some harmonic layers and other percussive pattering, adding textures of delicious aural joy.

This is a women’s tale, and men are virtually absent from it. When one finally appears in a scene after about 90 minutes of none, we’re momentarily shocked at the intrusion.

It’s not so much that men are unwanted in this story, it’s just that they’re… unnecessary. We do not miss their absence.

At the center are Merlant and Haenel, giving exquisite performances as two people who were not expecting to find love, but find they cannot turn away from it. This is one of the year’s great films.