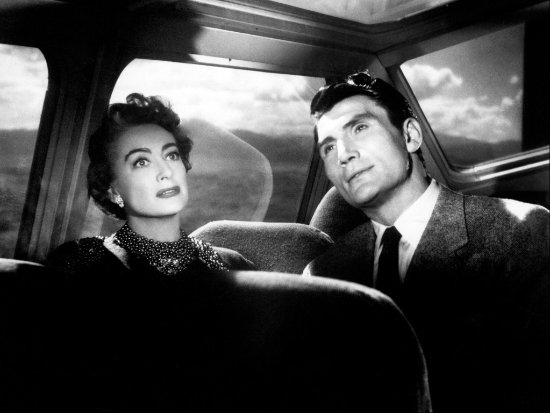 Everyone loves the story of Jack Palance winning an Academy Award at the end of his career for "City Slickers," nearly 40 years after losing the Oscar for his previous nomination as the menacing villain in "Shane." The one-armed stage pushups, Billy Crystal's endless host quips thereafter, and the redemptive story of a not-quite-star finally getting his golden recognition have officially entered Hollywood lore.

What most people don't realize is "Shane" wasn't Palance's first Academy Award nomination. It actually came a year before "Shane" for his role opposite the great Joan Crawford in "Sudden Fear," a largely forgotten film noir. Crawford received her own nomination, along with nods for the excellent black-and-white cinematography by Charles Lang and costumes by Sheila O'Brien.

It's a great-looking though middling picture that falls somewhere between the gritty realism of film noir and the family/romance melodramas of Douglas Sirk and his ilk. It's basically a woman-in-distress star vehicle for Crawford as a famous, wealthy playwright who falls hard for a young actor whom she marries before realizing he's a conniving cad who wants to off her for her fortune.

The age differential between the two characters is never overtly stated or discussed, though it seems clear she's supposed to be significantly older than him. Palance was 32 when the film came out, in the full bloom of vibrant manhood. He looked almost like an entirely different person as a young man, simultaneously handsome and frightening with his hard-angled features.

Palance looked like a devil they'd plucked out of hell and wrapped some skin around.

The exact year of Crawford's birth is somewhat obscured in mystery, though using the most commonly accepted timeframe she was nearly 50 when "Sudden Fear" debuted. She was one of the rare Golden Age actresses who got by more on raw talent and her powerful screen presence than her looks.

A lot of people don't know Crawford broke into showbiz as a chorus line girl. She used to attend every party in town she could to show off her dance moves in hopes of getting better parts. Her famous queen's eyebrows were ferociously plucked and/or dyed during her ingenue years, to the point that like Palance she was barely recognizable between her younger and older self.

I have to admit to being a little disappointed in "Sudden Fear." Director David Miller was a journeyman who seems not to grasp the dark mood and rhythms of the noir genre. The screenplay by Lenore J. Coffee and Robert Smith (with uncredited contributions by Crawford), based on the story by Edna Sherry, is rather overlong and poorly paced.

Myra Hudson (Crawford) finds out that her new husband, Lester Blaine (Palance), is conspiring to kill her around the 45-minute mark, leaving more than an hour for her to fret and scheme and run from danger. What we end up is a whole lot of closeup reaction shots of Crawford and Palance just becomes this guy on the sidelines going in and out of doors.

It may seem sacrilegious to say, given his Oscar nomination and subsequent iconography, but Palance doesn't come across as particularly scary in this movie. He actually seems to be a straight-arrow type who has genuinely fallen for Myra until his old flame, Irene (Gloria Grahame), wanders into town and threatens to expose his sordid past unless he goes along with her plans to fleece his new wife.

In a lot of ways, she's the real villain of the piece -- and an unexplored one at that.

I found it strange that he film never talked much about Myra's work as a playwright, other than she's independently wealthy as a result of it aside from the estate she inherited from her father. Upon first meeting on a train to San Francisco, she knows Lester because he was turned down recently for a role in her new play. She wants to explain to him why to reassure him it had nothing to do with his acting ability, but he refuses in a gentlemanly way.

It would have been more interesting if Myra primarily wrote mystery plays so we could see how she functions as one of her characters might in a similar plight. Alas.

Interestingly, the script keeps dropping all sorts of hints of ways that Myra might die that never come to fruition. There is the perilous stone staircase from her mansion down to the sea, which Lester makes out to be terrified of for her safety. We also uncover a bottle of poison, a revolver and other methods for death, and she has nightmares about falling or being smothered by a pillow.

I suppose the filmmakers' idea was to keep teasing the audience with the possibility of her murder, but to me it didn't heighten the sense of danger so much as keep stretching things out longer than they needed to be.

There is a nice gimmick using a recording machine in Myra's office that she uses to dictate her plays and other business. At one point her friend and attorney, Steve Kearney (Bruce Bennett), presents her with an update to her will that makes a meagerly allowance for Lester should she die or they divorce, and Myra instead dictates a much more generous version.

We think Lester will stumble across this information -- Myra had shown him how the machine works, including the fact it turns on automatically whenever someone starts to speak -- but instead he and Irene blab out their entire plan while hiding out in the office during a party. Then Myra hears the recording and realizes they're going to kill her.

Of course, one wonders why Myra doesn't immediately go to the police, or call her attorney, or simply jump on a train to anywhere. It's never sufficiently explained, though she accidentally breaks the disc recording of Lester and Irene's plotting, so I guess the idea is supposed to be she has no proof. But surely a woman of Myra's intelligence and resources would've thought of something better.

For awhile she tries to turn the tables on them, planting false letters and luring them to Irene's apartment so Myra can kill Lester and frame Irene for it. It all seems overly complicated and unlikely.

Crawford is her usual terrific self, playing a character who's a little more reserved and less self-assured than her normal commanding performances as a strong woman up against bitter circumstance. I just wish the movie could've cooked up a better part for Palance, who's more dimwit than devilish.