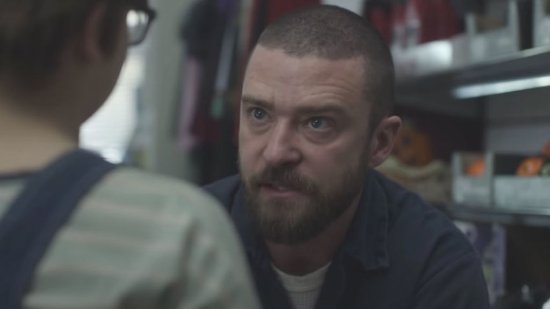 It's always interesting that wherever someone's creative talents first bring them notice -- music, stand-up comedy, voice actors, writers, TV -- how so many eventually find their way to film acting. Any kind of ability as a storyteller can be solid grooming for performing in a movie.

The crossover between singers and the movies is surprisingly strong, going back to the early days of cinema where they largely recruited talent from song-and-dance men and women of vaudeville. Barbra Streisand, Bing Crosby, Elvis, Bette Midler, Beyonce and Frank Sinatra are just a few.

I'm still deciding where Justin Timberlake will land in that pantheon. I haven't been terribly impressed with his onscreen work thus far, and aside from voice work on the "Trolls" movies and such, he hasn't appeared in a feature film for eight years.

His new film, "Palmer," is a solid move in the right direction. It's a deliberately gritty, non-showy role -- the sort of low-budget thing someone of Timberlake's stature makes to announce that he wants to be taken seriously as an actor. It's not a great film, but it's a solid turn for him and the problems I had with the movie weren't centered on his performance.

He plays Eddie Palmer, an ex-con who is just being released from prison after 12 years for attempted murder. He moves back to his sleepy Louisiana town, where he used to be a big wheel as a star quarterback who got a scholarship to play at LSU. But he got hurt, got hooked on pills, did some terrible deeds and got pegged as the "golden boy gone bad."

Palmer, as he likes to be known, doesn't have a lot of prospects as he returns home. His parents lit out when he was a kid, and the grandmother who raised him, Vivian (the great June Squibb), is getting on in years now. He hooks up with his old loser buddies, drinks a lot of beer at the local dive, and lands the only job he can as an elementary school janitor.

His boss (Lance E. Nichols), doesn't even give him his own set of keys.

With his hair buzzed to nothing, beefy physique and sullen expression etched on his face -- finally showing some creases after decades of fame -- Timberlake is miles away from his days as an NSYNC boy band star.

The story (screenplay by Cheryl Guerriero) goes in a direction we don't expect. Vivian has a tenant at the trailer home on her property, Shelly (Juno Palmer), who lives with her young son, Sam (Ryder Allen). Shelly is barely a mom, often lighting out to party and drug for days at a time, leaving her kid in Vivian's care. Soon after Palmer returns Shelly disappears, seemingly for good this time, and he suddenly finds himself responsible for watching out for Sam.

Sam is utterly irrepressible, a kid of pure heart and endless optimism. He also prefers "girl" stuff like princesses and barrettes and tea parties, and is not at all ashamed of it. Needless to say, this buys him a lot of teasing, and worse, from the kids at school.

Palmer isn't quite sure what to make of this. Let's face it, back in his day he probably would've been one of the boys bullying Sam. But he finds some surprising measure of self-worth in his new role as protector and father figure.

It's a terrifically self-confident performance for Allen, in his very first feature film role. I wish the movie could've done a little more to get inside his head and see what makes Sam tick. I don't think director Fisher Stevens wanted to make Sam explicitly trans or gay, just different. The focus isn't on Sam's gender issues, but how Palmer reacts to them.

Alisha Wainwright turns up as Maggie, Sam's school teacher who soon takes a shine to Palmer -- first to check him out as a suitable guardian for Sam, and later out of genuine interest as a fellow fractured person.

It's the sort of role that's basically obligatory in a movie like this, but she puts subtle spins and flavors into the role.

Temple is also very good as Shelly, who makes a return late in the story that's somewhat predictable but still lands with a solid emotional smack. Early on the movie portrays her as heartless and hopeless, and Temple gives us small notes of redemptive qualities.

There are also some nice supporting performances in the background, such as Jesse C. Boyd as one of Palmer's buddies, stuck in an eternal rut he has no interest in climbing out of. Dean Winters has a blink-and-you'll-miss-it turn as Shelly's abusive boyfriend.

"Palmer" is one of those movies that has a lot of admirable things going on, though it seems like it's missing some of the connective tissue that would bind it together more coherently. It does give Timberlake a platform to show off some non-musical chops I hadn't expected out of him -- and a wish to see more.

Posted by Christopher Lloyd at 12:03 PM