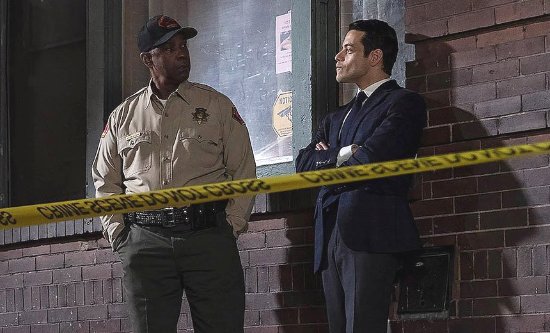 Another serial killer movie, with a pair of detectives on the hunt who keep letting it seep into their personal lives -- I know, right? Seems like we’ve had a lot of these over the years.

And yet, “The Little Things” manages to fall back on the conventions of the genre while also cleverly sidestepping them. And it boasts a trifecta of Oscar winners in Denzel Washington, Jared Leto and Rami Malek, along with an able hand in writer/director John Lee Hancock (“The Blind Side,” “The Founder”).

While clearly inheriting a lot of the DNA of “Se7en,” this film is like an intricately wrought piece of clockworks, ticking along as interlocking pieces of storytelling machinery quietly snap into place. It knows just when to tease information out, when to withhold it, and when to let it drop right when it can have the deepest reverberation.

We first meet Joe Deacon (Washington) as he’s coming off a shift as a lowly deputy in dusty Kern County, Calif. He’s given a trash assignment to go down to Los Angeles to pick up a pair of boots for evidence in a court hearing, the sort of thing you hand off to a rookie, which Deacon decidedly is not. He accepts it without complaint, even meekly.

Down in L.A., they’re dealing with a killer who hunts young women, tortures them and take a bite out of their torso. (Shades of “The Silence of the Lambs.”) Jim Baxter (Malek) is the hotshot young detective on the case, a clean-cut sort who fits the mold of a department that’s gotten a little “churchy,” to quote one of the old hands. The story is set in 1990.

Deacon’s trip gets extended a little longer, and he drops in on some old friends. Turns out he’s something of a legend in L.A., both for cracking cases and for cracking up five years back in spectacular fashion -- losing his badge and his marriage, and undergoing heart surgery, all within six months.

But the old fires still burn, and Deacon starts helping out with this case, and for a while he and Baxter are conducting parallel investigations, circling each other as much as the guy they’re seeking.

Now, in movies of this sort they would be instant antagonists, the young buck being resentful of the older, cagier colleague. And that dynamic is there to some extent. But Baxter is also wise enough to accept help wherever he can get it. He figures if Deacon is trying to work out some of his old hangups, that’s fine as long as it helps save lives.

Gradually, Deacon starts to regain some of his old edge -- along with reawakening sleeping ghosts. And Baxter stops thinking he’s the smartest kid in class and realizes that being mentored is good for his soul, as well as his clearance rate.

I don’t think I’m giving much away when I say that Leto plays the guy they start looking at for the murders. Decked out in long, greasy hair, a ghastly pallor impressive for L.A., a pot belly and a hitch in his gait, Leto’s Albert Sparma -- could anybody with that name be a nice guy? -- looks like he’s got to be guilty of something.

It’s a truly eerie performance, a loser who seems to be brimming with self-satisfaction, a guy holding a series of dead-end jobs who’s wily enough he even manages to give an old fox like Deacon the slip while tailing him. He also has this unsettling way of pointing at whoever he’s talking to.

Great work also for Washington, the epitome of the cinematic alpha male who here is pensive, regretful and broken. There’ a scene where Deacon confronts Sparma in an interrogation, and we think it’s going to be the usual snappy verbal fencing thing, but instead it plays out in a way that’s unexpected but likely truer to form.

“The Little Things” may not be the most original film to come down the pike, but it puts plenty of spins and twists into the mix to make the familiar seem fresh again.