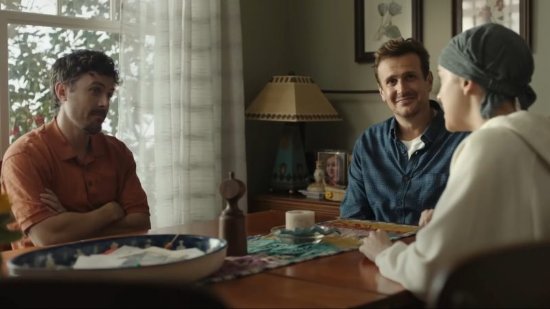 If just a few years ago you would've said to me, "Jason Segel deserves an Oscar nomination," I'd have laughed right in your face. He's done a lot of goofball humor that's not my bag. But after his incredibly sensitive, layered performance in "Our Friend," that's exactly what I'm saying myself.

Casey Affleck, too, who stars along with Segel and Dakota Johnson in this unapologetic weepie based on article by journalist Matthew Teague. It's about how when his wife came down with terminal cancer, their best friend, Dane, essentially put his life on hold to move in with them and help care for her and their two children -- for a year.

Imagine "Love Story," except there's a third member of the couple dynamic.

Dane is that well-meaning but wayward friend we all have -- they guy who can't seem to hold a relationship together for very long or find meaningful work that speaks to his talents. We feel sorry for him but also a little annoyed at his string of screw-ups.

Dane (Segel) worked as a backstage guy in local theater and dreams of doing stand-up comedy. But he wound up as the assistant manager of some little retail outlet and unable to commit to a string of girlfriends. When during one visit he offers Matt (Affleck) a little advice on his relationship with Nicole (Johnson), he finds his concerns dismissed because his own life is such as chaotic mess.

Director Gabriela Cowperthwaite and screenwriter Brand Igelsby ("The Way Back"), adapting Teague's magazine article, take the risky but effective choice of having the story jump around in time. So we'll see these three back when they were still youngsters fresh from college, cutting to deep into Nicole's long campaign against cancer, to some years earlier, and so on.

Each section is introduced with a typed title in relation to the cancer: "One year after diagnosis," etc. Rather than breaking the narrative up into confusing bits, it becomes more like a prism that we can turn and inspect from different angles and different points in time.

Early on Matt is a journalist working in New Orleans -- I appreciated the authentic dialogue referring to his newspaper as the "Times Pic" -- who dreams of working for bigger outlets, doing more important stories. When we transition years later we learn that's exactly what has come to pass, but now it's a thorn in the marriage as he's always gallivanting from one international locale to another while she's stuck home with the kids.

Nicole was an actress who loved singing on stage and being the center of attention, but traded it in for domestic bliss as mother of two daughters (Violet McGraw and Isabella Kai) and gadfly, the unofficial mayor of their small Alabama town. She's the sort of woman men follow around, and other women want to be friends with.

Why would a guy like Dane essentially put his life on hold for a year to essentially become nurse, therapist, housemaid and nanny for his two best friends? The film charts not just the time of the three of them together but also provides glimpses at his personal life and private moments. There's Kat (Mariella Scott), his girlfriend back in New Orleans who can't understand why he would abandon her to help care for another woman.

Most affecting is the recollection of a hiking trip he took, spontaneously, some years earlier. Gwendoline Christie plays Teresa, a German woman also hiking alone who joins him for a way, sensing someone walking down the same dark path she once faced herself.

If there's a central theme of this story, it's about how each of us is alone and afraid, but strive to find the courage to reach out to others -- even when that hand is sometimes slapped away. The details of Nicole's descent can be hard to watch, but Dane is the sort of guy who wouldn't think of walking away when his closest friends are in need.

In the strange world of movie releases these days, the film actually debuted at the Toronto Film Festival to great acclaim in fall of 2019, and only just now is seeing wide release via theaters and VOD.

Somehow its arrival at this precise moment seems perfectly fitting. In a world of division and alienation, "Our Friend" is a beautiful and heartfelt story of loss and generosity of spirit. Bring hankies.