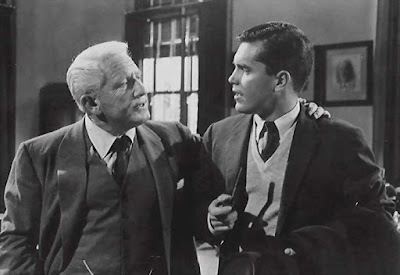 Despite being so closely associated with Westerns and, to a lesser extent, war/adventure films, John Ford did in fact make straight-up dramas -- and even a romance or two. "The Last Hurrah," a box office disappointment that has been largely forgotten today, is the unlikeliest of John Ford pictures: a political drama.

The story is still a familiar archetype we often saw with Ford's John Wayne collaborations: an aging leader/loner looks back on his life with both pride and regret, and resolves to ride off into the sunset doing what he knows best. Instead of a gunslinger, though, Spencer Tracy's protagonist is Frank Skeffington, mayor of an unnamed New England city who is running for his fifth term in office.

Frank had previously been governor, too, so it seems apparent to everyone but him that he has nothing left to prove. But Frank has been running things for so long that he can't imagine ever giving up the reins of power willingly. He enjoys charging about town in a Cadillac limousine equipped with a police siren so he can run all the red lights, a small group of loyal henchmen always at his side.

Despite telling his nephew, Adam Caulfield (Jeffrey Hunter), that this will be his final campaign, a "last hurrah" -- pronounced "hoo-RAH" in New Englandese -- we suspect that if he had won Frank would be saying the same thing again four years down the road.

Spoiler alert: Frank loses the election in the end. And not just to a talented up-and-comer, but to a spectacularly unqualified young nimrod put up by the bankers, church leaders and newspaper publishers who have dogged him for decades. It's the ultimate humiliation, and Frank succumbs to a heart attack soon after.

Still, this is an ending comparable to the cowboy shootist dying in the ultimate gunfight: he may lose, but he goes out on his own terms.

Frank, lying abed clinging to his last moments of life, is visited by one of his longtime enemies who opines that maybe the old politician, having just made his last confession, would have done things different if he could. "Like hell I would," Frank bleats, opening his eyes just long enough for one last act of defiance.

Frank has lived with a chip on his shoulder his whole life, and it became his defining trait. Born in the town's Irish-Americans slums, he crawled and scraped his way up the ladder, using charm and grit in place of money and prestige. The old Yankee bluebloods who controlled the city's levers of power for centuries resent the Irish upstarts -- just as their children will one day resent the browner wave of newcomers.

The screenplay by Frank S. Nugent was based on the book by Edwin O'Connor, who didn't take much trouble to hide the fact it was a portrait of Boston mayor James Michael Curley, a notorious crook. He served four terms as mayor, including five months of his last while in prison for mail fraud.

Curley was out of politics but still alive when "The Last Hurrah" came out. He threatened the studio, not because he worried about an unflattering portrait but because he harbored delusions of selling the rights to his life for a biographical movie. Columbia Pictures paid him $25,000 to go away -- one last grift for the shady pol.

The film takes pains not to depict Frank as explicitly corrupt. We never witness him using his powers for evil or self-interested ends, though he's not above a little old-fashioned light blackmail.

In one instance, he persuades a prominent banker (Basil Rathbone) to release loans for a new low-income housing development by pretending to appoint his idiot son (O.Z. Whitehead, complete with a spectacular lisp) as fire marshal, threatening to release photographs of him looking ridiculous in a white firefighter's hat and yachting outfit.

Still, Frank lives in a magnificent mansion that would seem out of sorts with a public servant's salary. (Mayors did not usually have official residences back in that day -- Curley did not, and his ostentatious abode was the subject of much controversy.) Frank also thinks nothing of throwing a $1,000 gift (disguised as coming from his deceased wife) to a new widow whose husband left her in a poor state.

The story doesn't say much about Frank's politics or positions, though it's pretty clear he's a Democrat Catholic while the bluebloods are Republicans and largely Protestant. In the few bits of dialogue relating directly to his acts as mayor, Frank references different statues that competing constituencies wanted to place in a prominent spot, and he compromised by picking a female saint.

Frank's biggest nemesis is Amos Force (John Carradine), publisher of the chief local newspaper; the men openly despise each other with a lifetime's worth of enmity. It seems Amos fired Frank's mother when she worked for him as a maid, "stealing" a few pieces of leftover fruit. Frank can't let go of the affront, and Amos can't believe someone so low rose so high.

This complicates things with Adam, Frank's nephew, since he is the star sports columnist for that same newspaper. Frank invites him to follow him along during his last campaign, not as a journalist but an adored relative. The reasoning is never provided, though I might surmise he hopes to rope Adam into going into the family business someday.

Certainly his own son will not. Frank Jr. (Arthur Walsh) is a happy-go-lucky playboy who seems to do little more than go on dates with girls -- two at a time, even -- and seek out hot bebop music. It's clear how disappointed Frank is in his son, though he takes pains not to show it to the kid.

Adam's character is really a piece of storytelling furniture that never goes anywhere. He doesn't actually seem to follow along during the campaign very much, and his few scenes away from the action detract from the goings-on. He has arguments with his wife, Maeve (Dianne Foster), over father's contempt for Frank.

His only really interesting interaction is when he leaves a funeral in a huff, upset that Frank's presence attracted hundreds of people to the wake of a man who, by all accounts, had few friends and was an ungrateful skinflint. But someone points outs to him that even though Frank effectively turns the funeral into a political event, it's better than the widow having to grieve in an empty room.

The various side characters and hangers-on are a motley bunch of comic stereotypes. There's "Cuke" Gillen (James Gleason) and John Gorman (Pat O'Brien), hard-nosed types and old-school ward heelers who know how to grease some palms and get the vote out.

By far the most colorful is "Ditto" Boland (Edward Brophy), a bald little dynamo of obsequiousness, who always refers to the mayor as "His Honor" and seems to serve no other function than to follow Frank around, fetch and tote, and mellow out the old man's volatile moods. He even buys a peaked hat identical to the boss', which they refer to as a "hamburger."

Charles B. Fitzsimons plays the election opponent, Kevin McCluskey, a war veteran and family man who looks good so long as he doesn't open up his hole. In one hilarious bit, they shoot a live TV promo depicting his family life. His wife is so camera-struck she reads her lines woodenly from a cue card, and a mutt brought in from the dog pound to round out the portrait won't stop barking.

Tracy is comfortable and cantankerous in the role, showing us a man who is genuinely great but also ridden with flaws and faults. He's a brilliant retail politician, eschewing radio and TV for old-fashioned rallies and pressing of the flesh. But Frank has trouble seeing the forest for the trees, looking at the odds stacked up against him and seeing them as just more obstacles to be overcome rather than bellwethers pointing him toward a comfortable, content retirement.

One of the best lessons I've learned later in life is that everything has a beginning, middle and end. The start is usually a struggle, so when you get to the middle you revel in it so much it's often very hard to see the end staring you in the face. When you let your experiences define you, rather than the other way round, the letdown becomes inevitable.