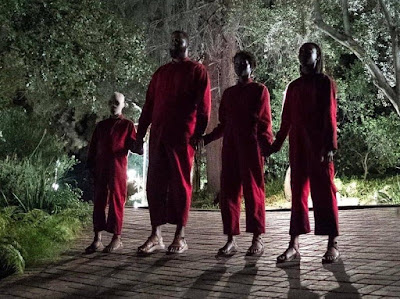 I think the best kind of horror films, particularly those with a supernatural edge, are the ones that don’t try to explain everything to you. They just present a confounding mystery, and let it hang there.

One of my favorite of recent years was “It Follows,” in which people are inexplicably pursued by relentless doppelgangers. I would add “Us” to the list.

Writer/director Jordan Peele’s sophomore effort is superior, in my opinion, to his previous venture, the smash hit “Get Out.” Lupita Nyong’o stars as a seemingly normal woman with darkness in her past that will catch up to her and her family.

Thirty years ago as a child, Adelaide had a chilling experience inside a carnival funhouse, where the image in the mirror turned out to be a real live reflection. Now that person, who has grown up just as she did, returns to the “real” world to exact a blood-soaked revenge.

I don’t want to give away too much, since the very appeal of “Us” lies in its teasing out information and surprises. Suffice it to say, Adelaide isn’t the only one with a nefarious shade following her around.

Winston Duke plays her husband, Gabe, a good-natured guy; Evan Alex plays their son, Jason, who has a few disturbing aspects to his own personality; and Shahadi Wright Joseph is teen daughter, Zora, who makes a show of her independence until it’s time to fall back on her family.

The big twist of the movie wasn’t a surprise for me, but I watch a lot of films and there’s only so many tricks in the bag. But it’s still a very satisfying ending to a terrific movie fraught with frights.

Bonus features are quite expansive and include six deleted scenes, funny outtakes and an extended version of the dance sequence. There’s also an in-depth exploration of the making of three pivotal scenes and five documentary shorts.

Posted by Christopher Lloyd at 10:44 AM