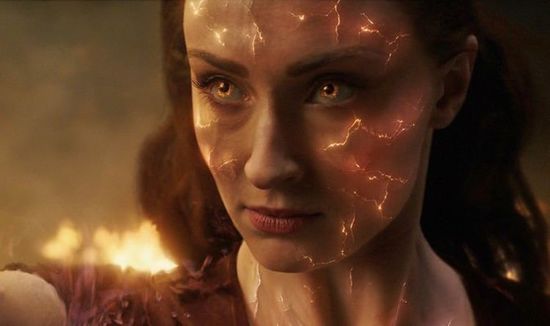 I still think the first iteration of the X-Men would’ve done a great job with the Dark Phoenix Saga, one of the most storied arcs in comic book history. That cast of the superhero outcast mutants -- Hugh Jackman, Famke Janssen, Halle Berry, Patrick Stewart -- felt the most emotionally true of any super-franchise.

You could feel their sense of alienation and conflict about whether they should serve the humans who hated their kind, or dominate them.

But I’m pleased to say the “new” X-Men still pull it off with plenty of emotional and action oomph. “Dark Phoenix” will reportedly be the final film in the series produced by 20th Century Fox, though my guess is eventually it’ll be merged with the Marvel Comics Universe (MCU) the way Spider-Man was, and we’ll see more X-films with yet another cast.

The Dark Phoenix story is well-known to even casual comic book fans. Jean Grey (Sophie Turner), a telepath/telekinetic and protégé to Professor Charles Xavier (James McAvoy), is irradiated with alien energy during a rescue mission. She seemingly dies but is resurrected with fantastically heightened powers, dubbed Phoenix like the mythical bird that rises from its ashes.

But great power brings great temptation, and Phoenix begins to use her abilities for less-than-benevolent purposes. Eventually her own team of X-Men turns on her, seeing her as a threat to their hard-fought peace with humans.

This film time-jumps to 1992, seven years after “X-Men: Apocalypse.” The X-Men have become accepted by mainstream society and hailed as heroes. Professor X has gotten bit drunk on his status, both figuratively and literally, swilling from omnipresent tumblers and enjoying a direct phone line to the President.

“The way the women keep saving the men around here, you might consider changing the name to X-Women,” one veteran needles him.

After the accident, Jean goes searching for clues to her long-buried past, and the terrible accident that killed her parents and brought her into Professor X’s charge at his school for mutant children. She gets angry when she learns the truth, things escalate, and collateral damage soon becomes an existential threat that brings multiple power centers to bear.

Writer/director Simon Kinberg, a veteran producer and screenwriter directing his first feature (after Bryan Singer exited the franchise in a cloud of controversy), has a good eye for action scenes, though some of the talkie scenes are rather clanky.

(He also knows how to shoot Turner to beneficial effect in a way her myriad “Game of Thrones” directors never seemed to grasp, aka chin down.)

Michael Fassbender turns up again as Magneto, conflicted former villain now maintaining an uneasy peace with humans. Other familiar faces are Tye Sheridan as Cyclops, who shoots energy beams from his eyes and is Jean’s beau; Alexandra Shipp as weather-controlling Storm; and Evan Peters as max-speed Quicksilver.

And then, of course there’s the “blue trio”: Jennifer Lawrence as shape-shifting Mystique; Kodi Smit-McPhee as teleportation devil Nightcrawler; and Nicholas Hoult as the Jekyll/Hyde scientist/monster, Beast. It’s weird that it never struck me before they all share the exact same shade of midnight sapphire.

Jessica Chastain is the chief villain as Vuk, the icy blonde leader of a mysterious alien race known as the D’Bari that has a nefarious interest in Phoenix and her dark power.

There’s not a lot of subtext, humor or wasted energy in “Dark Phoenix,” just a straight-ahead thrill-seeker about a woman everyone had dismissed as timid who finds she enjoys the taste of power too much. I admit that if I had that kind of cosmic control in my hands, I’d be inclined to command some more X-Men movies.