Review: "The Secret Life of Pets 2" 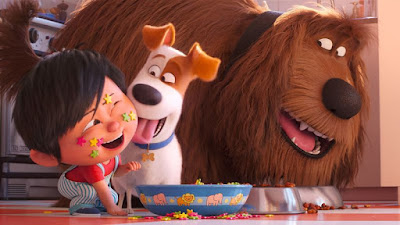 "The Secret Life of Pets 2" is not made for me, or thee -- unless one of us is under the age of 10. In which case, I'll endeavor to keep the cursing in this review to a bare minimum.

Like the original film from three years ago, "Pets" is specifically and intentionally made for little kids to enjoy, and for parents to endure. During the screening whenever I started sighing or feeling my thoughts start to wander, I just looked over at my two boys, smiling and laughing their heads off.

Eighty-six minutes of intensely cute and predictable storytelling is not too much to endure for your children.

If anything, I like the sequel a little more than the first one. It splits up the action into three separate storylines, so just when one is getting a little tiresome it switches things up.

The main role of Max, voiced by Louis C.K., is taken over by Patton Oswalt (for #MeToo reasons). He's an excitable Jack Russell Terrier who's resistant to change. Duke, the big shaggy doofus voiced by Eric Stonestreet whose introduction into Max's household formed the basis of the first film's story, gets relegated to the backburner here.

A few years have passed and their woman has married and produced a baby, Liam, to whom the dogs are very attached. When the New York City family goes off for a vacation in the country at an uncle's farm, it sets all sorts of activities in motion.

Gidget, the cultured Pomeranian (voice of Jenny Slate) who pines for Max, is put in charge of his favorite toy, Busy Bee, but quickly loses it into the intimidating lair of the old lady downstairs who has a literal regiment of scary cats. To infiltrate this den of hiss, Gidget must disguise herself as a feline and learn the ways of the cat from her too-cool neighbor, Chloe (Lake Bell).

Meanwhile, uppity rabbit Snowball (Kevin Hart), who's really committed to playing super-hero dress-up with his girl, goes on his own mission. Befriending a Shih Tzu named Daisy (Tiffany Haddish), they rescue an albino tiger from a nasty circus owner (Nick Kroll). Then, of course, they've got to find somewhere to stash it.

Out on the farm, Duke and Max are impressed with the farm dog, Rooster, voiced with delicious gruffness by Harrison Ford. He's everything they are not: self-reliant, authoritative and master of other critters.

Rather than a typical movie dynamic, where Rooster resents the urban invaders and then gradually warms up to them, the country dog is more or less benevolent from the start. He's clearly annoyed by their lack of skill in essential dogginess, like herding sheep and howling at the moon. But Rooster sees Max not as a city slicker to be dismissed so much as a youngster in need of tutoring.

It's about as close to a blue state/red state bonding as we're apt to see in the movies these days.

Director Chris Renaud and Brian Lynch continue to ride their "Minions" formula: slapstick mixed with fart jokes and doe eyes. It's unsophisticated filmmaking for a kiddie audience, nothing more and nothing less.

You can bemoan that this type of movie exists, or pony up to the ticket booth and make your young'uns happy.