Review: "Echo in the Canyon" 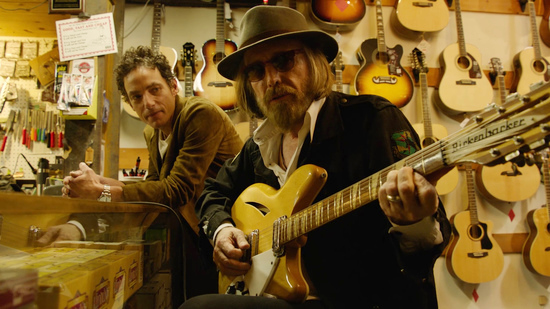 The "it" in the quote above is what became known as the California sound, a mix of folk and rock music emerging in the 1960s that helped define much of popular music ever since. "Echo in the Canyon" is the superlative new documentary that explores the folk rock phenomenon and how it was birthed in one place, Los Angeles' Laurel Canyon.

A lush, hilly enclave overlooking the seediness of the Sunset Strip on one side and the elite opulence of Beverly Hills on another, Laurel Canyon became home to eclectic showbiz figures like Harry Houdini and Tom Mix, and later young 1960s musicians including Brian Wilson of the Beach Boys and Stephen Stills and David Crosby, who were in a couple of bands together.

Director Andrew Slater and executive producer/narrator Jakob Dylan gather many of the iconic musicians themselves, who talk about how the music cross-pollinated simply because everyone was in such close proximity to each other. People would show up at another's doorstep and start to riff.

(Along with not a little pharmacological recreation and hanky-panky.)

They also gather musical artists of today who talk about how they were influenced by the California sound, culminating in a huge revival concert at L.A.'s Orpheum Theatre. Rather than trying to reimagine those 1960s songs, the contemporary musicians do their best to replicate them.

It's pure aural ecstasy, a thrill to see people like Dylan, Fiona Apple, Beck, Regina Spektor, Norah Jones and others harkening back to their forbears.

Dylan makes an intriguing spirit guide, acting as a quasi-journalist as he interviews the legends. As the son of one himself who established his own substantial identity as frontman of The Wallflowers, he's able to maintain a little bit of detachment instead of just acting as a gushing fanboy.

Crosby is one of the most forthcoming, turning to the camera and declaring the real reason his bandmates turned on him. "It's because I was an asshole," he mock-whispers.

Many of the old-timers whip out guitars, effortlessly recalling songs they created 50+ years ago, and telling how they came to be.

The story of the California sound begins with the American folk music movement, but got its impetus from the British invasion -- aka the Beatles. Young musicians were blown away by the combination of folk chord progressions with a rock beat, and wanted to make their own version of it.

This ushered in an era of ambitious, poetic lyrics that went beyond standard-issue lovey/dovey mush.

"Echo" talks a lot about the Beatles and the Beach Boys, but also does a good job of exploring how other short-lived groups provided fuel for the movement. Bands like The Byrds and Buffalo Springfield aren't as well known today, but they were pivotal in developing folk rock, along with The Mamas the Papas, and many others.

There's even a reference to a little-remembered film from 1969, "Model Shop," which the pioneers say captured the look and feel of Laurel Canyon in the '60s as well as anything they sang. I'll have to put that down as one to check out.

Perhaps the most endearing presence in the film is Tom Petty, despite the fact he's the one interviewee who doesn't perform a song. He does do a little riff on a vintage Rickenbacker guitar, and also underlines that it's a Ricken-BACK-er, not a Ricken-BACH-er.

Petty was just a kid from Gainesville, Fla., when the California sound first emerged, but as soon as he heard it he knew where he belonged.

Graham Nash says that music can change the world, even if it's in little ways that aren't immediately apparent. "Echo in the Canyon" gives ample voice to a period of musical exploration that is still resonating today.

Posted by Christopher Lloyd at 4:48 PM