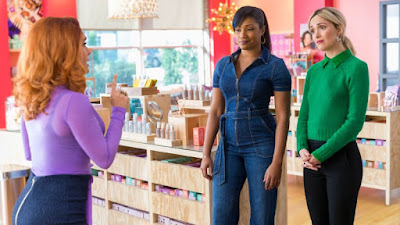 At first I thought "Like a Boss" was a semi-remake of "9 to 5" about women's struggles in the workplace, with a tyrannical female boss instead of a chauvinist male. Instead it's probably closer to "The Internship" or similar buddy comedies, in which professional challenges lead to two besties experiencing conflict.

It's a fun, frothy girl-power flick with a nice cast and good energy. It drags in the middle, but starts and ends well.

Tiffany Haddish has gobs of "presence," to use an old-fashioned Hollywood term. Whenever she's on screen, you're paying attention to her, no matter what anyone else is doing. She plays Mia, one half of a spirited duo of women who have been best friends since middle school.

"We shouldn't feel bad about putting our careers first. It's what men do," she says.

Problem is, their company is a half-million in debt, which Mel -- the quieter, analytical one -- has hidden from Mia, the gregarious creative force. When they're approached by makeup tycoon Claire Luna (Salma Hayek) to invest in their business, it sows the seeds of an inevitable split between lifelong friends, followed by the ordained reuniting.

As a rule Hollywood movies don't focus a lot on the workplace because, well, most people's jobs are pretty boring. ("We need a spreadsheet montage to spice things up!") Even when they do, work is interrupted by a constant parade of lunches, dates, hangouts, errands, etc. Watching these movies you'd think people spend about three hours a week at the office.

Things follow a pretty predictable cycle as the pair work to ingratiate themselves into Luna's company, Ovieda. (Pronounced "Oh-vee-AY-da," not "Oh-VEE-do," the slightly redneck-y city near my Florida hometown.) Luna makes increasingly outlandish demands, then changes her mind, then drops them like a hot potato.

Hayek is done up in slathers of makeup and colored contacts, wearing tight-fitting clothes of flamboyant hue. She looks like a Barbie doll version of herself, a shoe-in for the "Obnoxiously Rich Housewives of Atlanta" cast.

The role is written as more reactionary than satirical, like a reptile eyeing its prey. It's funny for a bit, but just a bit.

Billy Porter and Jennifer Coolidge play Mel and Mia's employees, who are treated more like family. Karan Soni is Luna's toadying lickspittle in a one-joke role.

I liked Natasha Rothwell, Ari Graynor and Jessica St. Clair as Mia and Mel's other close friends, who love them dearly but are all on the mommy track. Despite the lighthearted nature of the movie, the five of them have some fairly authentic exchanges about the life/work balance challenges women face, and how those who choose independence end up feeling ostracized.

Also unexpected but appreciated is that the filmmakers (director Miguel Arteta, screenwriters Sam Pitman and Adam Cole-Kelly) don't try to shoehorn in obligatory love interests for Mia and Mel. Mia has a much younger boy-toy where they're both quite happy with frequent but non-committal hookups, and Mel brings some bro-dude home and then dismisses him like the help.

No, this is a movie about girl love: The kind of bonds women form over the years that might shift and crack but never shatter. It's not a terribly funny or ambitious movie, but file it under "I just liked spending time with these characters."