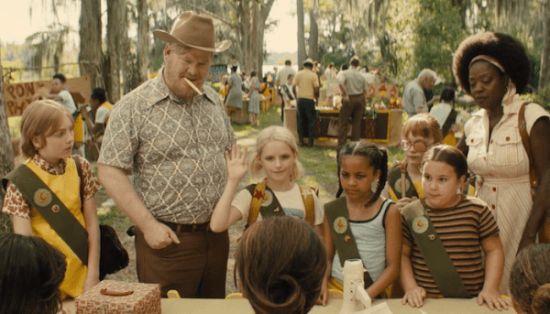 “Y’all will find life gets much easier if you don’t want so much.”
--Principal Massey

As a sucker for warmhearted, Southern-fried dramedies I wanted to like “Troop Zero” a lot more than I did.

It practically vibrates with authenticity, capturing life in 1977 Georgia in the fictional hamlet of Wiggly. It’s the sort of homespun place with one restaurant, Butte’s Chicken, where everybody knows everybody and nobody much has any money. Blacks and whites lived side-by-side long before integration because nobody here can understand that sort of foolishness and, again, there isn’t enough coin to have two of everything.

The bored librarian wears neon-blue eye shadow, children are pretty well left to their own devices and the town lawyer is a jolly cracker who can’t find his pants and keeps a toothbrush tucked behind one ear.

That would be Boss Man, daddy to the Boss, aka Christmas Flint, played by McKenna Grace. She was terrific in “Gifted” from a couple years ago playing a young genius, and here she’s playing a girl who’s not especially bright and a whole lot awkward.

Christmas lost her mom a year ago and is like a leftover puzzle piece, trying to figure out where she fits in the world.

She spends her evenings staring up at the stars, yearning to connect with life from outer space. On Earth, things are pretty glum, but Christmas has naïve innocence about her, all pigtails and goofy smiles.

Boss Man (Jim Gaffigan) is on the phone a lot or away helping clients who tend not to pay him, so Miss Rayleen (Viola Davis) ends up as her de facto guardian. She’s her dad’s secretary, but once harbored ambitions of her own toward going to law school and getting out of Wiggly.

Rayleen has a stern way about her, smoking and cussing, but we suspect there’s a lot of heart underneath. Mike Epps is Dwayne, the good-hearted neighbor/buddy/ex-con.

The story (screenplay by Lucy Alibar) gets kicked off by a visiting NASA scientist who is recording voices on a Golden Record that will be sent into space via satellite. The winners of the regional Birdie (think Girl) Scouts talent competition will get to be one of the voices, and obviously since Christmas is an alien nut it immediately becomes her quest.

This means getting past the school principal, “Nasty” Miss Massey (Allison Janney), who also doubles as the troop mother of the local Birdie troop, led by certified mean girl Piper (Ashley Brooke). So Christmas and Rayleen set about recruiting the dreggiest of dregs from the local kid populace. They include:
Things fall into a fairly typical scrappy-underdogs-surprise-everyone type of plot, as Miss Massey and her troop of nasties throw up obstacles, while Troop Zero -- which they’re labeled because there are “no numbers left” -- overcome adversity and form unlikely friendships.

The movie is directed by director duo Amber Finlayson and Katie Ellwood (who go by Bert & Bertie, in an apparent bid to unseat McG for the title of Silliest Filmmaker Nickname). They seem to have the heart for this material but not a good notion what to do with it.

The kids’ interactions, which are the center of the movie, are a bit stilted and contrived. Davis and Janney are their usual magnificent selves, but the Oscar winners have one-note characters to work with.

“Troop Zero” is a little bit “To Kill a Mockingbird,” a little bit “Meatballs,” and not a little “Fried Green Tomatoes.” I love the ingredients but didn’t fall in love with the way they were put together. It needed some more time in the deep fryer to finish cooking through.

Posted by Christopher Lloyd at 3:56 PM