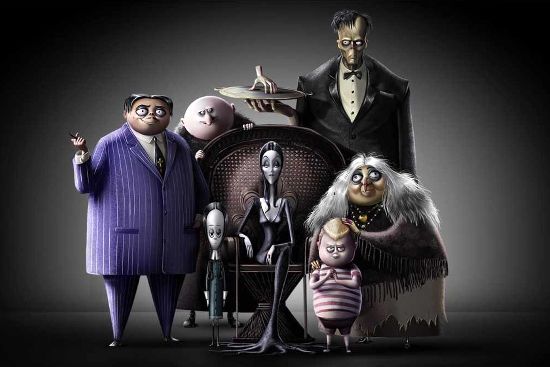 File “The Addams Family” under “Reboots We Didn’t Need, But Aren’t Terrible.” At least they’re going in the opposite direction as Disney, which seems determined to do a live-action remake of every animated hit they’ve ever had -- even the crappy ones. (*Cough* *cough* “Mulan” *cough* *cough*.)

Here the 1990s comedies starring Raul Julia (may he rest in pieces) and Anjelica Huston, preceded by the 1960s television show, are revived as a kiddie cartoon flick.

It’s a good fit, since the premise is as cartoonish as it gets. A family of death-loving weirdos take up residence in the mansion on the hill, creeping out the neighbors with their 24/7/365 celebration of Halloween-esque themes.

Gomez (Oscar Isaac) is the smooth patriarch, though we get the sense his wife, austere Morticia (Charlize Theron), really runs the show. Son Pugsley (Finn Wolfhard) is an awkward people-pleaser, while dour daughter Wednesday (Chloe Grace Moretz) has a studied, detached air to her. Nick Kroll does the voice of bald, super-creepy Uncle Fester.

It’s a nice voice cast, though Moretz stands out for her slightly formal line readings. I chuckled every time Wednesday spoke.

The plot is some contrived claptrap about getting the entire Addams clan to gather from all over the globe for Pugsley’s coming-of-age ceremony. (Which involves deadly sharp sabers, of course.) Allison Janney provides the voice of their nemesis, television home improvement host Margaux, marshaling the forces of shiplap and bright hues.

There’s a lot of emphasis on boingy action and throwaway jokes, some of which work and some that deserved to be thrown away.

I mildly enjoyed “The Addams Family,” though my kids loved it and yours probably will, too -- unless they’re weirdos who like ponies and rainbows and life-affirming stories.

It’s coming out with some nice bonus features. My favorite is “Charades with Thing,” an interactive game in which the bodyless hand invites you to guess what he’s miming. There are also deleted and extended scenes, a storyboard-to-final evolution of a scene, a rogues gallery of character profiles featuring each voice actor, two music videos and a throwback feature to the previous film and TV versions.