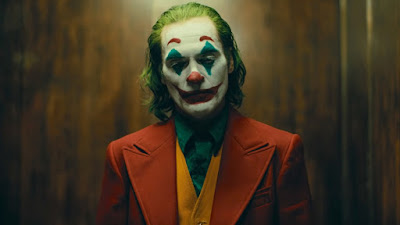 Like a lot of movies centered around a singular great performance, “Joker” suffers somewhat from being so dominated by its central character. This is, of course, the madman villain from the Batman franchise, indelibly played by Heath Ledger and less so by Jared Leto.

Now Joaquin Phoenix tackles the role in a grim, R-rated psychological drama that seems barely tethered to the comic book world that spawned it. Like Phoenix’s other amazingly off-kilter performances of recent years -- “The Master,” “Don’t Worry, He Won’t Get Far on Foot” -- he brings such singular, loopy energy to the role that you come away believing no other actor could’ve played the part.

You could argue “Joker” is a comedy, especially as it’s directed and co-written (with Scott Silver) by Todd Phillips, best known for gross-out comedies like “The Hangover” trilogy. Certainly there is a dark undercurrent of humor here, with Phoenix playing Arthur Fleck, a pitiable clown whose dream is to make the whole world laugh.

But there’s so much of a creepy vibe as we follow Arthur on his journey toward becoming the Joker that you’re more likely to grimace than chuckle.

He lives with his mother (Frances Conroy), a feeble-minded invalid, and yearns after his down-the-hall neighbor, Sophie (Zazie Beetz). Just as things start to look up for him, Arthur begins a long spiral into madness and mayhem.

Robert De Niro plays Murray Franklin, the TV talk show host Arthur idolizes. When video of Arthur bombing at stand-up comedy goes viral, Murray is among those to pile on.

I’ve heard the complaint that “Joker” somehow idolizes “incels,” a term first used to describe, then insult, men who are unable to have relationships with women. I learn this has become an online community where men embrace the term and project their negative emotions on others, often in misogynist ways.

These critics must have not seen the movie I did. The idea that “Joker” is a celebration of pathetic loser who feels squeezed out by society is pretty bonkers from where I sit. Examining how a person reaches a place of utter nihilism is an act of creative bravery, not indulgence.

But maybe “Joker” is the perfect reflection of our age, in which we are urged to shun that which we don’t understand rather than engage with it.