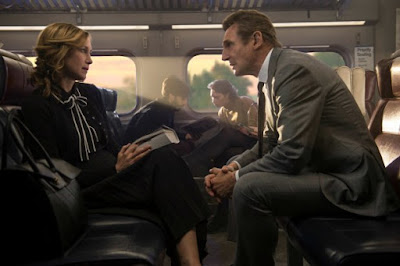 Just a few quick thoughts; Andrew Carr is handling the main review over at The Film Yap, so please head there to check it out.

On the surface, "The Commuter" is a standard issue enclosed-space action/thriller in the vein of "Die Hard," "Speed" and countless imitators. Using the nomenclature that was popular awhile back, this movie would constitute the "Die Hard on a Train" iteration.

What makes it more interesting is the subtext beneath the fisticuffs and nail-biter sequences. The characters talk constantly about "doing the right thing" and how it rarely benefits the do-gooder. The hero is a classic everyman who wanders into a moral quandary through a momentary temptation, and has to spend the rest of the movie climbing out.

The movie has a sense of glum resignation tempered by notions about the bedrock decency of the masses. But their default mode is to expect disappointment.

It's a totem for our times: the rich, the powerful, the corrupt conspire to coerce regular folks into doing their bidding, who usually must go along. And they would've gotten away with it this time, too, if it weren't for this meddling oldster.

Liam Neeson returns for another variation on his Kick-Ass Geezer routine, which has been his bread-and-butter for a decade now. Reportedly Neeson himself has grown tired of such roles and has vowed "The Commuter" will be the last of its ilk.

All I'll say he's still an engaging, energetic presence and I'd personally be happy to keep watching him do this sort of thing until he needs a walker, provided he mixes it up with some dramatic or romantic roles.

The set-up is simple: Michael MacCauley is an Irish-born ex-cop turned insurance salesman. He and his wife (Elizabeth McGovern) live hand-to-mouth and are trying to figure out how to pay for their son's college education.

(Or so they say: their huge, luxurious house  in the New York City exurbs and BMW crossover would suggest otherwise. Hollywood continues to flail at depicting middle-income families.)

He suddenly gets laid off, seemingly for no reason, and Michael knows what that means for a 60-year-old in a competitive job market. Interestingly, Michael explicitly mentions his age several times in the film; usually mainstream movies are much more circumspect about the age of their characters, especially older ones.

After meeting his cop ex-partner (Patrick Wilson) to drown his sorrow in a few beers and bumping into an old precinct rival (Sam Neill) who's recently made captain, Michael boards his normal commuter train to Tarrytown. He's confronted by a mysterious woman (Vera Farmiga) who, under the ruse of a hypothetical social experiment, offers Michael $100,000 in cash if he can identify a person onboard the train who "doesn't belong there."

That's it. The only proviso is that he doesn't know what will happen to the person, known only by the pseudonym of Prim, but we can probably guess it won't be anything good.

Things go from there with the expected twists and surprises. Michael breaks the rules set forth, and bad things happen. People on board the train who would seem to be allies turn out to be in cahoots with the evildoers, others who seem strange or threatening are actually something else, and so on. I'm not giving anything away in saying that this is the sort of movie where the hero comes to the realization that he's not just a pawn, but the patsy.

Directed by Jaume Collet-Serra, who made the effective seaborne thriller "The Shallows," from a script by Byron Willinger, Philip de Blasi and Ryan Engle, "The Commuter" does all the things we expect, and a few things we don't.

Posted by Christopher Lloyd at 11:32 AM