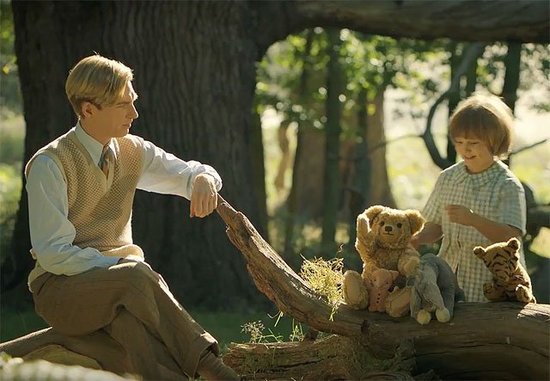 It didn’t get a lot of attention during the early awards cycle or sell many tickets, but “Goodbye Christopher Robin” is an absolutely gorgeous film that explores some rather ugly subjects. On the surface it’s a look at the private life of “Winnie-the-Pooh” creator A.A. Milne. But on a deeper level, the movie serves as a portrait of a family whose dysfunction is widened by sudden fame.

Before World War I, Milne (Domhnall Gleeson) was a successful playwright of light comedies. But after being affected by the horrors of combat, he retreated to the countryside to write a treatise on the urgency for peace. He and his wife, Daphne (Marge Robbie), bring along their beloved tyke, Christopher Robin, known to them as Billy Moon (Will Tilston). It would see a perfect bucolic setting to bring them together.

Except… Milne finds he can’t write a word. Daphne tires of the sticks and decamps for the city life. And Billy Moon feels lost between them.

Eventually Milne and his son draw closer, and he crafts a series of stories involving him and a bunch of his stuffed animals, which the writer brings to life. Virtually overnight, Pooh becomes a sensation and Billy is turned into a celebrity, the representation of the perfect British lad. Tours, interviews, public appearances and the like becomes his new normal.

Kelly Macdonald plays Olive, the devoted nanny who largely takes care of Billy Moon while the parents are (often) physically or emotionally absent. She tries to warn them about what the effect of sudden fame could be to a little boy.

For his part, Milne finds himself resenting his own son. The people adored Pooh and Christopher Robin, but somehow the man who conjured them up and put them down on paper becomes almost a bystander.

Perhaps because it’s a challenging look at a family driven apart by money and fame, “Goodbye Christopher Robin” did not get all the consideration it deserved while it was (briefly) in theaters. Here’s hoping it gets a chance on home video.

Bonus features are decent enough, cemented by a feature-length audio commentary track by director Simon Curtis and screenwriter Frank Cottrell Boyce. There are also several promotional featurettes about the production and a gallery of photos from the set.

Posted by Christopher Lloyd at 4:33 PM