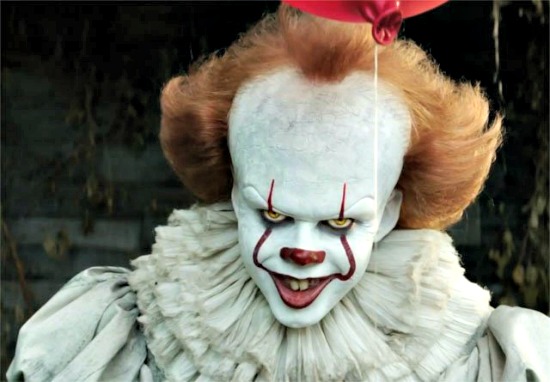 “IT” was scary, moody and effective. It was also overlong and troubled by some bad pacing. Not to mention the overreliance on “boo gotcha!” moments. Those work fine the first few times. But the 23rd, not so much.

I haven’t read the book by Stephen King or seen the 1990s television miniseries, which I think helped my viewing experience since I didn’t have anything to compare it to. For those as innocent of the story as me, it’s about a gaggle of kids -- 13 in the movie, 11 in the book -- who battle Pennywise, the evil clown they refer to simply as “it.”

In the convoluted world that only exists in books and onscreen, these children are left to battle the dread spirit on their own without any meaningful assistance from adults in their seemingly normal town of Derry, Maine.  Those grownups that do wander into the tale are unhelpful at best or actively malevolent in all likelihood.

Bill Skarsgård gives a terrific performance, supplemented by dramatic makeup effects that make Pennywise resemble Larry from the Three Stooges after a spin through Timothy Leary’s medicine cabinet. Pennywise speaks in a disturbing mix of childish sing-song and guttural croaks.

Kids in Derry start turning up missing in astonishing numbers, and the local sheriff is too busy drinking or abusing his son, local bully Henry (Nicholas Hamilton), to do anything about it. So it’s left to the club of misfit students who call themselves the Losers to investigate.

The first half of the movie is a little slow, but once the battle with Pennywise is joined it picks up pace and energy. After grossing nearly $700 million worldwide, the sequel to “IT” -- which picks up a few decades later when the kids are adults -- is an absolute certainty. Which maybe gives you a clue as to Pennywise’s ultimate fate at the end of this film.

Video bonus features are a mite light considering how much scratch the movie made at theaters. Both the DVD and Blu-ray editions come with 11 deleted or extended scenes; “Pennywise Lives!”, a look at Skarsgård’s transformation; “The Losers’ Club,” a behind-the-scenes look at how the teen stars bonded during production; and “Author of Fear,” a look at King’s creation and its cinematic adaptation.