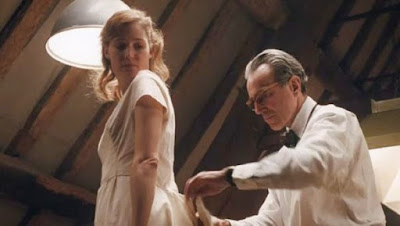 I sincerely hope Daniel Day-Lewis doesn't carry through with his pledge to make "Phantom Thread" his final screen appearance, for the simple reason that I wouldn't want him to go out on such a sour note.

The esteemed actor has essentially been semi-retired for the last two decades, only appearing in a movie once every few years -- his last was five years ago, and won him an unprecedented third Oscar for Best Actor. It seems strange to call it a career now at the height of his powers, when he can pick and choose his projects. But Day-Lewis has publicly stated that playing in this film left him "overwhelmed by a sense of sadness."

Now that I've seen it, I know how he feels.

Day-Lewis' performance is a technical marvel as always, playing renowned dressmaker Reynolds Woodcock in 1950s London. But writer/director Paul Thomas Anderson has crafted a character who is defined by his inability to relate to others. He seems impervious to joy. He has cut down his world to only the very narrow spaces in which he is in absolute control, and rages against any intrusions into that sphere.

Simply put, it's not someone you really want to watch over the course of a 140-minute movie.

Now, you can certainly have characters who are unlikable, but still compelling. A prime example: Daniel Plainview, the evil tycoon of the last Anderson/Day-Lewis collaboration, "There Will Be Blood."

But Reynolds is so off-putting, so veiled in his innermost workings, that an entire movie about him is a suffocating experience. It's like being locked away with your hateful uncle, and you have to pretend to like him.

The most interesting character is the least developed one: Vicky Krieps as Alma Elson, a French waitress essentially adopts one day after spotting her in a country inn one day. She's awkward, sincere, self-possessed, not especially beautiful. He's at least 30 years older than her, yet she's flattered by his complete attention toward her... for now.

On their first date he takes her home and has Alma model for him. Reynold's icy, mysterious sister, Cyril (Lesley Manville), appears out of nowhere and wordlessly assists him as he takes Alma's measurements. It's clear this dynamic has played out before with other young women: the artist, the muse who becomes a prisoner, the jailer.

"You have no breasts," Reynolds comments, without apparent cruelty or pity. Cyril seems nicer at first: "You have the perfect proportions,"she coos, to Alma's delight. "He likes a little belly."

Without any apparent discussion, Alma joins their household, becoming some combination of lover and employee. During the day, a small army of old women seamstresses appear to work on Reynolds' magnificent creations. When the three are alone, though, Alma's transgressions soon become bothersome, for such horrible acts as buttering her toast too loudly.

Things go from there. We cheer for Alma's little defiances and rebellions, but she soon knuckles under again. We pity her for awhile, then become disgusted with her when she acquiesces time and again.

Anderson fails to answer the basic question that should drive this movie: What does Alma see in Reynolds? His motivations are plain: he's an emotional renter, not a buyer, using the people around him in service to his true passion of making beautiful things. She remains a mystery, however -- even after taking matters into her own hand in a way that we do not expect, or grasp.

It's a visually splendid movie, and as you might expect the clothes are magnificent to witness. Day-Lewis cuts an interesting figure himself: thin to the point of spindly, silver hair swept back in a V-shaped crown, perpetually hunched over and gazing like a bird of prey.

Reynolds is a shell of a man who does not want anyone to be close to him, yet craves constant attention. He doesn't want lovers; he needs attendants. "I do not like to be turned away from," he complains.

I was vexed when the studio refused to show "Phantom Thread" to most critics in advance of the awards cycle. At first I thought it was a ploy to stoke fervor for the film. Now it seems more an effort to dress up disappointment.

What a tiresome finale for one of the finest actors of the modern age.

Posted by Christopher Lloyd at 10:41 AM