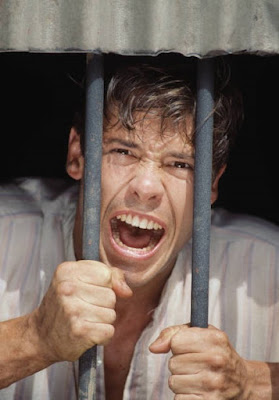 Errol Flynn was one of Hollywood's most colorful personalities, a man whose off-camera life was at least as vivid as the one we saw dancing across the screen, usually with the dashing, mustachioed actor waving a rapier or a pistol.

His autobiography, "My Wicked, Wicked Ways," published shortly after his death, was a smash hit that has never been out of print in nearly 60 years. He and ghostwriter Earl Conrad put together the book over the course of a few months in Jamaica, during which it was rare that one or the other wasn't off somewhere drunk and/or chasing women.

It's a great read, especially the parts detailing Flynn's international adventures in the South Pacific before discovering acting, although at least half of what's written is probably baldfaced lies. If true, by his early 20s he had already had more adventures than Indiana Jones.

I suspect that Flynn, best known for his rapscallion swashbucklers, was simply playing up his faded Hollywood image rather than relating personal history.

Shortly after reading the book I became aware of the movie "Flynn," starring Guy Pearce as Flynn from about ages 17 to 23 and focusing on his pre-acting days. There have been any number of screen portrayals of Flynn, generally centering on his latter debauched days, including portrayals by Kevin Kline in "The Last of Robin Hood" and Peter O'Toole as a barely disguised spoof of Flynn in "My Favorite Year."

But this was a portrait of the actor, drawn from his own words, about his formative years stumbling about the globe. (There was a forgettable 1985 TV movie sharing the title of the autobiography.)

I knew I had to see it, but "Flynn" is not an easy film to track down on video. A friend finally loaned me his DVD copy, which seems to be the version of the movie that played on Australian TV.

(Broadcast standards being different just about everywhere else than the U.S., my first impression was admiration that they managed to squeeze in two bare-breasted sex scenes within the first five minutes.)

I'm still smiling at the friend's response to my question if the movie was any good. "By no means," he messaged. I can't disagree, though it's not nearly the rolling catastrophe most people regard it as. Pearce himself has called it the worst film he ever made, and professed not to know what its final title is.

The progeny of the movie is nearly as contorted as Flynn's rambling words about his young life. It was shot in 1989 with Brian Kavanagh directing from a script by Frank Howson and Alister Webb. It was shown at the 1990 Cannes festival and bought by distribution company with the proviso that some scenes be reshot. Howson stepped in his director, several key actors were replaced with others, and they ended up reshooting about half the footage.

It played against at Cannes in 1993, this time under the title "My Forgotten Man," perhaps to fool the festival programmers into the playing the same movie a second time. It was set to get a theatrical release, but was pulled seven days before it hit screens over a copyright dispute. It was eventually released on video around 1996, and has been sold to various international markets, usually under the title "Flynn."

Pearce, who was in his early 20s when they initially shot the movie, bears little resemblance to Flynn other than an astonishing handsomeness. We can see how women, and not a few men, were dazzled by him. His attempt to grown the signature Flynn pencil mustache goes a short way in furthering the likeness.

Though not a strict adaptation of the autobiography, it follows the generally accepted biographical lines. Son of a famous biologist, kicked out of a fancy predatory school for sleeping with the laundress, he knocked around as a mercantile clerk before being fired for stealing. Flynn has a stint of homelessness before falling in with Penelope (Rebecca Rig), daughter of a rich businessman.

Eschewing the opportunity to wed into money and obtain a lucrative job from his father-in-law, Flynn departs for New Guinea to pursue the tales of massive gold finds. There he becomes embroiled in a running escapade of drinking, panning rivers for nuggets, being robbed and being the robber, bedding a native chieftain's daughter, battling malaria and being accused and convicted of murder.

John Savage plays Joe Stromberg, an American photographer who takes some early footage of Flynn parading through the jungle that gets sent off to Hollywood. Though we never hear anything more about it. Flynn actually gets his big break by doing a little do-si-do with another, getting him drunk and taking his place on a production of "Mutiny on the Bounty."

Steven Berkoff is a memorable presence as the conniving, bespectacled German Klaus Reicher, who befriends Flynn while grifting from him freely. They save each other's necks and then double-cross one another, repeatedly. He is purported to be a spy, but claims he's a wanted man on the run from the police.

The production values on "Flynn" aren't that bad, though the movie looks like it was edited with a Cuisinart. Scenes go on and on, such as men racing through the jungle, and then other parts will abruptly jump to somewhere else. In one confusing bit, Flynn shoots one of the natives trying to kill him, runs to the edge of a river, stand there looking at the water, and then suddenly wakes up in a hospital, recovering from malaria and with a murder charge hover over his head.

Even though it's not a very good movie, I'm glad I finally caught up with "Flynn." Pearce is a breezy, assured presence playing a man who knows for certain he's destined for greatness, but has no idea how to get there.

It was often said that Errol Flynn was a man who got by on confidence, looks and a little bit of talent. But people often forget that the first two make up a great deal of the latter in showbiz.